In the upcoming update of YOOZOO Games’ mobile RPG Saint Seiya Awakening: KotZ there will be a new character, Goddess Artemis. She fills the role of either a damage healer or pure support. The latest update also comes with two new PvE modes for players to engage with new challenges and missions.

The game is entirely based on a new manga series. According to the manga, Artemis is the Goddess of Moon and Hunt and one of the twelve Olympian gods and an older sister to Athena. Due to some dispute among the sisters disagreeing over Athena’s clash with Poseidon and Hades, Artemis followed her own thoughts allowing the Saints to travel through time and space.

Players can head into the battlefield with their entire army in the Next Dimension chapter of the Saint Seiya Awakening lore which also contains new story chapters and other gods joining the battle.

From March 17th, Artemis will accompany you in the battle and will also welcome other gods who will make their debut in-game following Ophiuchus Odysseus. She has two unique skill set trees as she’s both a healer and a damage dealer. Her Brilliance Aspect can be used to support or heal them while damaging her opponents with Hunter Aspect. Players are free to decide their role before heading to battle.

The update will also include new PvP and PvE modes. Also, in the Crest of Mt. Goroho, players can explore and fight different Saints to get rewards. The rewards include Skill Empowerment Stones which will ultimately enhance the skills of your characters. 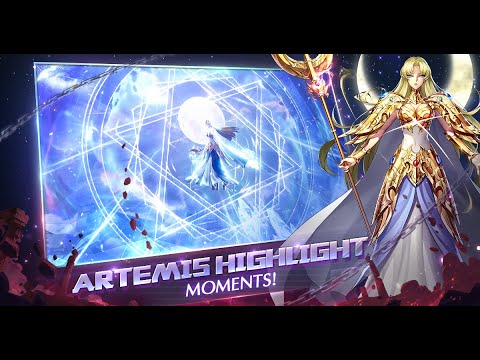 Saint Seiya Awakening: Knights of the Zodiac is now available on both Google Play and App Store. It’s free to play a game with in-app purchases.