App Army Assemble: Rubicon: A Conspiracy of Silence - Should you investigate this narrative-driven adventure?

Rubicon: A Conspiracy of Silence is a narrative-driven game about journalism and whistleblowers. It was developed by Midnight Mood Studio and La Belle Games in partnership with Mediapart in a bid to bring a level of authenticity to the storyline. We decided to hand the game over to our App Army to see how they handled becoming whistleblowers.

This narrative game was lacking on the graphics side and the sound droned on in the background and I turned it off. I spent quite a while waiting for something to happen, following the daily routine of a woman who has just returned to work from her holidays. To be fair, from the very beginning, there seemed to be an air of something going on that she wasn’t aware of.

However, I had the feeling that some of the dialogue wasn’t matched. For example, I asked the question ‘How did your meeting go?’ And the reply came back ‘Absolutely.’ There were more than a few examples like that which made me think that the answers were the same whichever option I chose. This definitely took the joy out of playing. All in all, not a bad game but there is room to improve the dialogue for sure.

The game runs fine with no problems and I like the way the game looks, I have not played a lot of games like this so did not know if id like it, that being said I have found this game to be quite interesting and found myself spending quite a bit of time in one gameplay session being sucked into the story wanting to find out what happens next, I was also a little confused at the beginning as to what was going on but as the story progressed everything become more clear as to what was going on and how the choices you make affect the outcome of the story. Rubicon is a clever and interesting game that I will spend quite a few more hours playing. 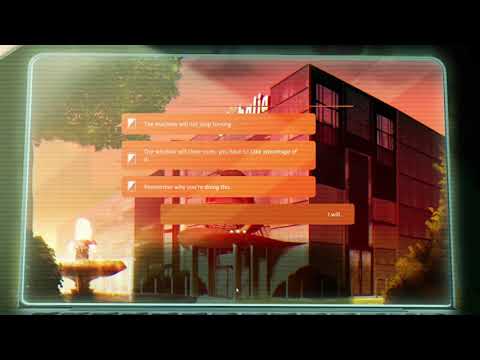 Rubicon starts out a bit slow, my pet peeve right off the bat was I didn't know who I was or who I was talking with right off the start, then found out that the man I was talking to was my boyfriend and I was playing a woman. After I figured out what was going on in the story I got into the groove of her 9 to 5 yet feeling I didn't have enough time to truly get through all the emails/messages before 5:00 (the game just stops when the day ends).

I like the choices they give you (you can play nice or just be downright mean). Plus pay attention to the fine details because if you don't they may come back and bite you in the end. The game slowly gets the intrigue of the story rolling and you seem to wonder what the outcome will be. I do want to finish to see the outcome but I don't know if I will replay it. I like where it's going but It doesn't grab me as much as some of the other story-driven games have.

Rubicon: A Conspiracy of Silence is a narrative-driven game that is based on whistleblowers and big corporations. The game sets up some really serious subject matter on the costs of profit versus the safety of consumers. By giving the player several choices that directly affect the player’s morality, you ultimately see how the traps get set that can have a real impact on people’s lives and financial futures.

This is a deep game with real topics to discuss. More polishing could be used as there are some problems mainly in terms of grammatical errors, spellings, and expressions that don’t always flow correctly during the course of the dialogue. The overall pacing is rather subdued due to a large amount of information presented to you, so it’s a game that demands more attention than most.

For people into games like Simulacra and Her Story, I'd say this game has a lot of potential. However, there are more than a few rough edges. Grammar and Spelling, while generally acceptable, have several noticeable errors. Choices you can make often seem disjointed, barely related to what came before. Character dialogue is not particularly consistent. The beginning of the game is extremely confusing. Overall, this has potential but could use some polishing, especially considering the price of admission.

I’ve played a bit of this and it goes from sedate work simulator to conspiracy-laden whistleblowing game. It starts off simple do your nine to 5 then things awry it’s up to you to work out what. I can see how different dialogues can change the outcomes and I have played this time around more nicely. Next play though I think I will be more aggressive. I must have played a good few hours in one go.

It is really engrossing. I do like this game. Would recommend if you are after an interactive choose your own adventure game with a nice narrative. It is obviously taking its queue from big multinational food companies in real life. You are asked in-game what is your red line and profit over people type thing.