There's not a sector in gaming that's changed as much as mobile over the past few years. It's gone from an afterthought to a thriving scene in no time at all.

But in the bubble, we've forgotten something. Other platforms have parades of classics that people still seek out and play years after their initial release.

The sheer volume of games on the platform has buried any chance of that happening on mobile. Where are the games everyone was playing in 2008 when the App Store launched? How do they compare against their modern counterparts?

We went back into the musty vaults of iTunes to find out.

Nowadays, there isn't an AAA video game franchise that doesn't have a mobile spin-off. In 2008, it seems like the biggest ticket in town was Crash Bandicoot.

One of the biggest sellers that year was a racing game that rejoiced in the title Crash Bandicoot Nitro Kart 3D. It's not hard to see why this would be appealing at the same time as Mario Kart was rocking the Wii world.

I've always wondered why cart racers aren't more popular on mobile. They seem a better fit for the platform than the more realistic racing sims like Real Racing 3 that top the charts.

So I was looking forward to checking this out. I was expecting the blocky graphics - there was no iPad or retina then after all, so things only had to look good on an iPhone 3 screen.

What I wasn't expecting was this: 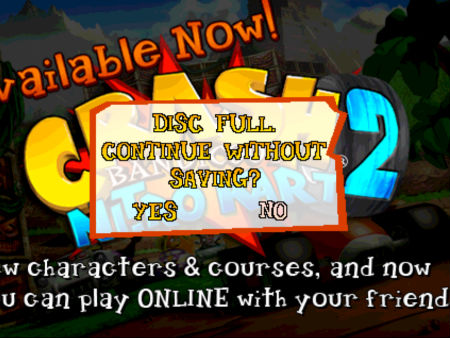 Especially when I had 2.4GB of free storage. I was also not expecting the game to continually crash during the tutorial. It made me feel like I was trying to get an old Windows game to run on a modern PC. Which is, surely, the opposite of what I'd want from an App Store game.

It also ensures that Crash Bandicoot is going to come off worse against any modern game we choose. Because most of them, whatever their flaws, at least work.

Rolando was once king of the app store. A top seller and critical darling, it was one of the first games to take advantage of the accelerometer. Tilt to play started here.

You play by rocking the device to roll groups of the spherical Rolandos through danger-filled obstacle courses. You need good dexterity to roll and jump your charges away from danger. There's some light puzzle elements, simple controls, a bit of basic physics modelling and cute cartoon characters.

It is, in other words, startlingly similar to modern-day app store hits like Angry Birds and Cut the Rope. 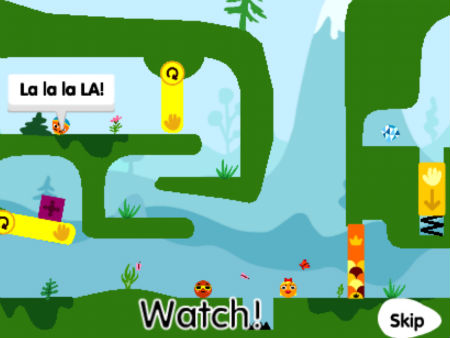 Because, or perhaps in spite, of this, it's pretty good fun. It looks terribly out of date with pixelated graphics. And it's been a long time since I saw that "X1" icon playing an iPhone game on my iPad. But it's appealing, and not as easy as it first appears.

So, looks aside, Rolando seems just as good as it's modern counterparts. Better, in some respects, because it's a little more difficult and, with plenty of imaginative obstacles, a little more varied.

So with the score at one all, it's time to move on.

Been running up that field

Not long ago that Tower Defence was the runaway success story of mobile games. It's not hard to see why. Well suited to touchscreen control and offering an accessible blend of speed and strategy, they've got wide appeal.

Fieldrunners was one of the earliest examples of a popular Tower Defence game. It has a variety of enemies and game modes which revolve around the same simple premise. Delay your foes on their mindless journey across a field by hindering them with gun towers. Then hope said towers kill them all before they get across.

I had high hopes for this. I like the genre and I'd played and enjoyed the sequel, Fieldrunners 2. Surely, I'd be looking at a game worth resurrecting? 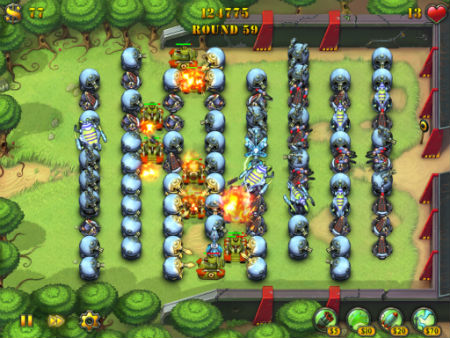 At first, it did look that way. Most modern games in the genre like OTTTD prefer to send enemies down a fixed path rather than across a field. I'd forgotten the simple pleasures of planning an efficient maze to funnel the foes, and upgrading towers to turn them into meat paste.

But this old game just doesn't grab the player's attention like its newer equivalents. When playing the excellent Kingdom Rush, you can't tear your eyes away for a second. There's always a tower to upgrade, power to use or enemy to target.

In Fieldrunners, by contrast, once you've set up your maze and upgraded the key towers, there's nothing to do but wait. It turns into a TV show. At one point I was able to get up and leave the game running while I made some tea. I came back to no less hearts and a much higher score.

After that, I'd had enough.

There are unquestionably some old mobile games that are still amazing. Galaxy on Fire 2 is a personal favourite. And while there are newer Infinity Blade games, I think the original is best.

But those games don't date from the earliest days of the app store, being released in 2011 and 2010 respectively.

My experiences with their predecessors suggests that beforehand, App Store games were largely uninspired.

This makes sense, though. Mobile gaming was a whole new scene back then. No-one knew how to make a great game for a device with a tiny screen, limited processor and touchscreen controls. It's not surprising that the initial experiments in this paradigm feel awful from a modern standpoint. Developers have had six years to make the most out of the hardware.

So don't despair. The App Store might not have any bona fide golden oldie classics yet, but it's just a matter of time. Give the crop of 2010 long enough to feel genuinely ancient, and they'll still play well enough to merit attention.

And in the meantime, if you want a retro-gaming fix on your iPhone, there's always Rolando.