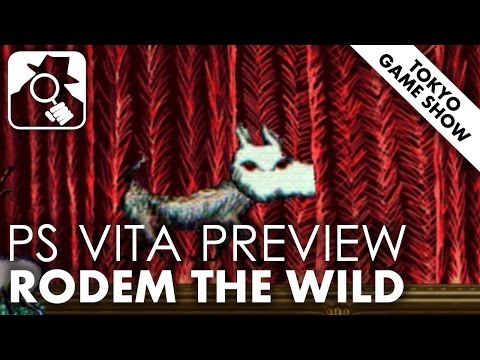 One intriguing oddity hiding away behind the Bandai Namco booth at Tokyo Game Show 2015 was dog survival simulation game Rodem the Wild. It's... a little odd, but we like that here at Pocket Gamer.

Rodem seems to be the name of the dog you control in the game, who can be one of four different breeds. Each breed will require different strategies and playstyles, much like Tokyo Jungle.

Story-wise Rodem has run off for a wander around Hyakujiri Park, where he must track down items, eat, poop, and generally avoid his master and death. There's also some sort of parasite symbiosis feature for good measure.

The entirety of the game takes place on an 8x8 grid, meaning there are 64 2D planes to play through. Each time you play, the items, characters, and events are randomised, meaning each player will have a thoroughly different experience each time they play.

The controls are all touch-based, from changing the direction you want to take on the map to searching backdrops and befriending other dogs.

Rodem the Wild's wobbly hand-drawn art style, sound design, and overall theme is truly bizarre, and perhaps not what you'd expect from the team who brought La-Mulana EX to Vita.

The peculiarities seem to stem from the involvement of creator of Bokosuka Wars for the Famicom, who's heavily involved with the project.