The cast of quirky cartoon Adventure Time is back on iOS for another interactive episode in Cartoon Network's platformer Rock Bandits, available in the US App Store now.

Rather than serve up another endless-flier, the maker of Rock Bandits has designed a more traditional platformer this time around.

However, instead of using a floating D-pad to guide protagonist Finn and his doggy sidekick Jake around each level, you swipe left and right to get things in motion.

You can also slay enemies by swiping your finger over them Fruit Ninja style. This is a system you're going to have to master if you want to rescue Marceline's frozen fans from the Ice King. 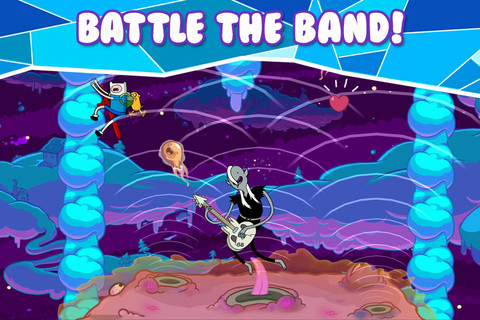 Collect the garbage littered around Rock Bandits's 20 levels, and you'll soon have enough to upgrade Finn's sword. So far, we've spotted a flaming blade power-up and one that looks like the arm of a zombie.

Plus, if you're a fan of the cartoon, you'll doubtless enjoy watching the game's zany plot unfold via an original animated comic.

At present, Rock Bandits is only available in the US App Store, where it can be purchased for $1.99. We'll let you know when the game goes live in the UK and Europe.