iOS + Android
| Rip Them Off

Rip Them Off is a minimalistic puzzle game that also incorporates elements of tower defence and economy management. It tasks you with lining the streets with a series of enticing shops to attract customers who will willingly spend all of their hard-earned cash. We decided to send in our App Army to see how high they could climb the corporate ladder.

I think the game is more a puzzle than tower defence as you have to get the right combination of shops. And that seems to be it. Yeah, you can upgrade but the levels I played you don’t get enough cash in time. Also, you are meant to build shops to the rhythm of the customers and how they appear in the line. But I don’t see any change. It’s hard to say because the game does many things right.

But for me. It is missing that special something to keep me coming back for one more go. I like the art style of the game and the music. As others have mentioned, it doesn’t feel like tower defence. More like a puzzle game. So far it hasn’t hooked me. But maybe it will maybe it won’t. All the ideas are there but it’s missing that something.

This game left me totally stumped. Most games start with a tutorial and a few easy levels to ease you into the gameplay. I managed to get past the tutorial quite easily but it went downhill from there. I don’t know if I just didn’t understand the mechanics but I kept losing so often that I gave up. I’m sure there’s a solution to getting through the levels but I couldn’t see it. I found it frustrating because the graphics and tutorial were good and I thought it had potential. Shame but it just didn’t click for me.

I found Rip Them Off a very frustrating game. On the surface, it’s a tower defence game but without the violence. The towers are shops to lure customers in to spend money. The graphics are abstract and the sound is ok. The capitalist dystopia portrayed by the in-game text is also good for a laugh. However, I found the tutorial level to be almost impenetrable and only got past it by trying all the shops I could afford. The second level then completely stumped me to the point I wanted to throw my phone against the wall.
If you want a perfect example of a game that is style over substance then this game is that.

Rip Them Off is quite a fun and challenging tower defence/ puzzle style game where you have to place your stores to attract shoppers/dupes to the stores in order to earn as much money as possible to beat the level within a certain set amount of days. You start off with little money to buy a few stores and can upgrade them as you go.

I found that the game was quite hard to get used to at first trying to work out what stores work best and where to place them and having to repeat levels over quite a number of times to finish them which did become a little frustrating but still fun luckily there is a speed-up option to work through the levels quickly to try and work out what stores work best in different areas.

The tutorial gives you a basic idea of how to play the game but not much else, I loved the artwork and look of the game with smooth gameplay and the music was quite good and relaxing to listen to. Overall I quite enjoyed this game finding it challenging and different so if you do like tower defence games and want to try something a little different I would recommend giving this one a try. 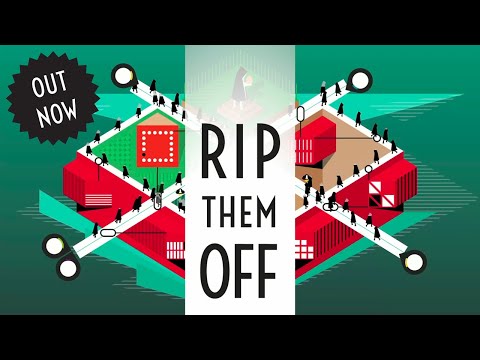 I suppose from a weird point of view you could call this a tower defence game. But rather than trying to stop the dupes from getting past you, you’re trying to make enough money from them to please your corporate masters. I like the visual style and the music, which was very reminiscent of the old Pink Panther cartoon music. As for the game itself, I didn’t really like that immediately after the tutorial, you’re on a level that (I found) took a great deal of experimenting and re-trying to get past.

And as far as I could tell (the tutorial didn’t cover anyway) you can’t change storefronts mid-level. On the other hand, you can speed up the passage of time so there isn’t too much waiting around to find out that you didn’t measure up to the expectations of the evil corporate fat cats. If you like games that take a jab at capitalism and require patience and management, you’ll probably like this. To be honest, I wasn’t sold.

I saw Rip Them Off described as a tower defence game, but it's more like a time management game I'd say, or maybe a hybrid. You have limited funds and can place shops in pre-fixed slots to try to extract as much money from the "dupes" as possible. More expensive shops tend to extract more money, but of course, you need to balance that against having a larger *number* of shops.

You have a certain number of days to do *something* - I'm not sure whether it's to gain a fixed amount of money or to extract 100% of the money from a given number of dupes. I've played it quite a lot, and I'm still struggling to establish the rules - there does seem to be quite a lot of depth to it, with a strategy that worked last time sometimes just failing to hit the mark.

The whole thing is wrapped up in a satire of capitalism which is quite darkly funny in places. Overall, it's an original game that would probably feel a bit too much like a random failure to a lot of people. (Having grown up with 80s videogames, random failure and frustration is kind of the baseline for me so I'm quite tolerant of it). If you like games where you have to make choices where to spend your money in a rushed, time-limited scenario though, it's worth checking out.

I wanted to try this game since it came out, but unfortunately, it didn’t meet my expectations. From a more “technical” point of view, RTO is described as a tower defence game. As others have posted already, it is more about time management than anything else. The goal is to get money from people (the dupes), and even if you miss some of them it’s no big deal. On the contrary, doing so in a tower defence usually means you cannot complete the levels with high marks. It looks very good and it is very funny, with similar humour to some games from the Tomorrow Corporation (Human Resource Machine, for example). The music is also excellent, with a lot of 80s vibes.

My disappointment comes from the rules of the game, as it feels more random than strategic at times. I liked the tutorial, but even after that solving certain levels still felt a little random rather than strategic. This is where my biggest disappointment with the game lies. You can replay levels an unlimited amount of times, but even if you try to match a source of people with its shops, it might not work at first for a level, even though it worked perfectly for the previous. I tolerate a lot of games that might feel frustrating for most people. RTO feels more random, however, and that is why I am not completely satisfied with it.

Rip Them Off is a game that’s big on graphics appeal, it has a minimalistic and sharp art style. The tutorial was short enough and I thought provided enough to start my journey and boy I was wrong. The first level itself took me five to six tries to get through and the later levels also had new features that they didn't teach me at the tutorial and it's a tower defence game...rather than stopping soldiers by shooting them.

You are stopping citizens by selling them things, you can choose the types of shops for your flow of customers, and the shops have slots like three and more and when they are full of customers, no one can enter the store until someone leaves. You can also upgrade those shops to fit in more customers. I feel the tutorial could have been better as there was a lack of explanation. Like the name, you have to Rip them off, it's an OK game but not a game for a huge audience.

If you'd like to give Rip Them Off a try, it's available now over on the App Store and Google Play as a premium title.