iOS
| Rip Them Off

Rip Them Off, a tower-defense puzzler about selling products to large masses of consumers, is now out on the iOS App Store.

The game is set in a minimalist world where high-rise buildings and fancy commercial businesses thrive. Citizens flow along as if on a conveyor belt, looking to make their next expensive purchase, and it’s up to you to manage this flow as efficiently as possible in order to satisfy The Board who expect great profits.

Each stage has you place down different businesses, each with their own capacity and profit margins, and so it becomes a game of trying to figure out the correct order that will maximise your earnings while ensuring the traffic of consumers isn’t disrupted. As you continue playing, the levels add new factors that further complicate things.

Rip Them Off is part-business management and part-tower defense, as it can be pretty difficult to work out where each business should go, but that’s all part of the challenge. It also makes a change from a lot of tower defense games, where instead of defending a base from invading enemies, you’re instead embracing them as you rinse as much cash out of them as possible. 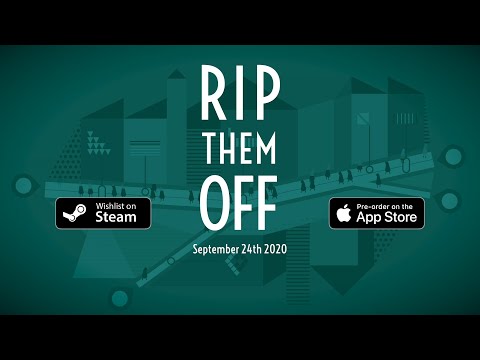 Rip Them Off is developed by Lozange Lab, a French studio comprised of two spouses dedicated to crafting delicate indie games for both console and mobile devices. Their debut game, Shuttle Shuffle: Aliens Panic, launched in 2014, followed by Swim Out in 2017, and The Unic in 2019. Rip Them Off continues Lozange Lab’s tradition of creating original puzzle games with unique twists.

You can grab Rip Them Off from the iOS App Store for £3.99. There are currently no confirmed plans for an Android version.

We love puzzle games here at Pocket Gamer, and here we’ve selected 25 of the best ones available on iPhone and iPad.
Next Up :
Daily Dadish lets you try and save your missing radish kids one day at a time, out now on mobile