We as the App Army

Retro Goal is the latest sports game from developer New Star Games, who have previously released well-received games such as New Star Cricket, New Star Soccer and one of my personal favourites, Retro Bowl. It sees players dealing with the management side of football before taking control of the team on the pitch. So, we decided to hand the game over to our App Army to see if they could juggle both sides of the beautiful game.

Wow, oh wow! This takes me back to the early days of Football manager in the mid-80s. That game was developed by a company named Addictive Games, and that name really works for Retro Goal. It has been ages since I got this hooked on a game, and aeons since a sports game had this impact. I hardly have time to write these words, as I am in the middle of a cup match against Chelsea.

Combining a sleek minimal management game with spurts of action during the matches make for both quick and long sessions. The controls during the offensive parts of the matches are some of the best touch controls I have experienced lately. Swipes, touches and drags to shoot/pass are easy to get into, but yet takes some work to master.

The presentation takes most of its cues from the classic from the 80s. The music got annoying quite quickly, but thankfully it can be turned off to let you enjoy your own music or pods.
Keeping a healthy rooster, recruiting new players and moving up the leagues is truly fun and makes for a great game in itself. Paired with quick-paced attacks I wo?t be able to put this game for quite a while. Epic!

I’m not new with New Star Games, having played New Star Soccer almost since launch, and keep going back to it from time to time. Now, they launched Retro Goal, a simplistic game where you play as a football manager. You will have to sign new players, upgrade your stadium, and facilities, and you will be playing games.

The gameplay in the matches is pretty simple, all done by gestures (swipes, touches). It’s fairly well implemented, but sometimes I feel like the swipes are not recorded, which is one of my major cons of the game. On the other hand, the pixel graphics are, in my opinion, very cool, as they give a retro feel that really goes well with the game.

In conclusion, the game looks good, is easy to start, and the controls are nice for a more simple approach, which they nail. I would suggest taking a second look at some swipe controls, and the choices you have to take, as some are meaningless (taking an extra 15 coins when you earn plenty after a match).

Retro Goal is a really awesome soccer game and if you are familiar with the great Retro Bowl, a football game by the same dev, you’ll feel right at home. Retro Goal features old school pixelated graphics and sounds. What’s really cool is how the game mixes traditional soccer gameplay with deeper sim elements such as handling rosters with player management, to team ownership aspects such as the likes of critiquing your coaching staff.

Players can become upset and it’s your job to reel them back in to create a winning culture just like in the real game. By combining real-time play with simulated parts on the fly keeps games short and sweet which works great for mobile play. The presentation is nice and simple, and the difficulty helps the game progression to move along at a steady pace. You start at the bottom of the league and earn your victories by putting in some work and making smart team decisions.

The controls can take a little time to get used to (there’s a tutorial), but once you do you’ll find it’s all rather intuitive and it just works for translating different soccer actions to the touchscreen. I highly recommend Retro Goal and while you’re at it check out Retro Bowl, two of my favourites on the App Store. 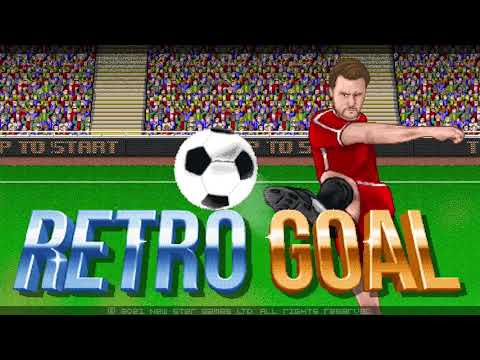 I’m kind of a hard sell on sports games, just because I’m not a huge sports fan. And I think in my life I’ve only played a game like this once (way back when it wasn’t retro, but just what the games looked like), and it was football and not soccer. And I wasn’t very good at it. So I wasn’t really expecting too much from this. The retro graphics look the part, and I liked that. It took me a while to get any good at it and I didn’t really like criticizing the players or coach when it was really my fault as far as I can tell.

But as I was able to level up and train players and make some improvements, like improving the stadium and training facilities, it seemed to make a difference. I understand that players of “New Star Soccer” consider this one to be inferior, and I can’t really say because I’ve never played that game. So I can only say that as a newcomer to the Dev, I enjoyed this. If you played New Star Soccer and you’re looking forward to a similar and/or upgraded experience, you might want to play the free version first.

Before playing, I had no idea “Retro Goal” was made by the same team as “New Star Soccer” - but the similarities are obvious - only this time you manage a whole club, not a single footballer.
The business management part of the game is intentionally simple: you can invest your hard-earned starbux to a. develop your stadium and get more starbux from gate receipts, b. improve your training facilities to increase your players’ stats (randomly, one of them will improve and you get to choose which stat to increase), and c. improve your youth academy in the hope of landing the next Messi.

Still, I have a bunch of gripes, the biggest being that no matter how well you play, you’ll still lose. Yup. I scored at every opportunity I got, and I still lost. Multiple times in a row. Come on, this isn’t nice. At all. Speed is king. Unless you’re able to consistently score long-distance goals (it’s possible), your best bet is to outrace defenders and score from inside the box.

Interesting approach, moderately addictive, the management side of things is simple yet thrilling, but the gameplay needs work. The art is functional.

So just to start by saying that Super Star Soccer and Cricket are two of my favourite mobile games with many hours sunk it to both…. But for me, the key element for those was the simplicity of the in-match controls matched with the fun lightweight management parts. Off the pitch is still very similar with back-office upgrades and player progression but I’m not a fan of the new graphical interface. The retro look just looks a bit unpolished, especially on the pitch.

That’s also where the gameplay changed and has become more complex. The game is now played from a side view looking like a budget version of FIFA 95. There are loads of new mechanics but I felt like most of the time I was trying to simultaneously pat my head and rub my belly, often resulting in shooting when I wanted to pass or passing when I wanted to run. Overall I’m not a fan of the new look and in-game controls, which I just found frustrating. Disappointed.

Next Up :
Forsaken World: Gods and Demons - everything you need to know about its new Conquest PvP mode