How long can we play Real Racing 3 for without forking out a dime?

Fans of the Real Racing franchise have been split down the middle over EA's decision to drive the high-end racing series down the freemium route. They've either hated the IAPs in Real Racing 3 or they've learnt to live with 'em.

Our own Peter Willington gave Real Racing 3 a Gold Award, but during his reviewing of the game he dropped a fiver on in-app purchases.

I was curious, then, to find out just how much game you could get out of Real Racing 3 for nothing.

So, I decided to conduct an experiment. I'd start Real Racing 3 afresh, and play nonstop until I hit a paywall. How long would I be able to play for before I was forced to wait (or cough up)?

The rules were simple:

"I'll never reach 30 minutes," I estimated as I fired up the game on my Nexus 7 and roared through the tutorial.

Was I wrong? Find out by reading on... 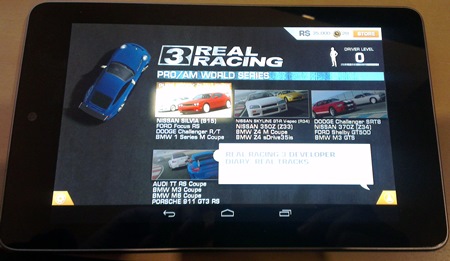 The first half hour drifts by as I clock up easy wins designed to stroke my ego, while the game gently jabs a needle containing addictive virtual fuel into my veins.

I even grow rather fond of my bland yellow Nissan Silva, despite my objections to not being given Real Racing's traditional VW Golf as a starting vehicle.

"What a charming grin he has," I think to myself as he cruises right past me. The swine.

Racing line: 30 minutes to an hour

In the first of the next series of races, I only manage a dismal 8th. I am so crushed that I have to take a breather, and eat a chocolate digestive.

I return to discover that my Nissan actually needs a service and that it would have only taken five minutes of waiting time. Instead, I have to throw away two more Gold coins.

Spending $6,000 on an engine upgrade to get a tiny speed boost, I scrape my way to Driver Level 2 and am rewarded with a load of dough and a Gold coin boost. They only lose their shine when I'm told there's 20 percent off the next car up, a Ford Focus. It might as well be a Lamborghini as far as my finances go.

Desperate to do better, I toggle the brake assist to 'low' so that I can pull off riskier driving manoeuvres. You know, like undertaking on corners and powersliding.

"My bravery will pay off over the next 30 minutes," I assure myself while eyeing up another biccy.

Manifold problems: An hour to 90 minutes 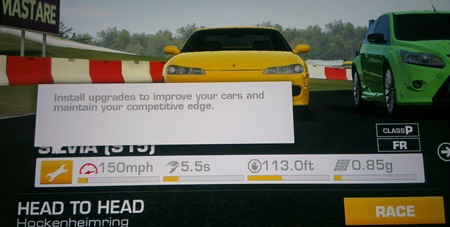 After nearly wrecking my battered Nissan (I really hate its nauseating yellow colour now), I realise that tap-steering and tap-braking are impossible without using my nose to brake.

With little choice, I turn on the tilt controls and brace myself for motion sickness. I soon accidentally crunch my Nexus 7 into the wall next to the desk while drifting.

As everyone else on the track races past me, I realise that I apparently have taken a tractor to a Formula 1 convention, so decide to splurge on all manner of services and upgrades.

Back on track: 90 minutes to two hours 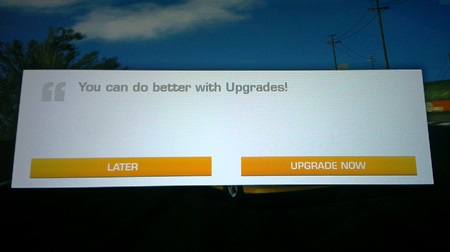 I'm now scarily in tune with the car handling. Which is useful. I'm also getting increasingly distracted by the weird Facebook profile snaps people have. One man has a Post-it on his head and I can't read what it says.

Will Wilson keeps beating me. "Why did I ever like that guy?" I grumble.

While letting the dog out and telling my wife that I should be coming to bed in "ten minutes or so", I take a 15-minute break and let the much-needed engine servicing run in the background. The rules remain unbroken and I munch on some Galaxy Counters as a reward.

Refreshed, refocused, and feeling a bit sick from the chocolate, I breeze through the next event and earn four Gold coins for coming first. 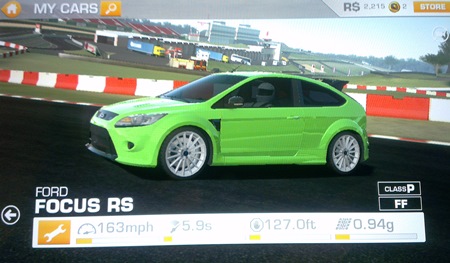 With R$ 35,000 in the bank, buying that dreamy - yet still yellow - Ford Focus is now a distinct possibility. I don't have enough Gold coins to skip the 7-minute delivery time, although I do need to clean my teeth and reassure my mildly irked wife that I "won't be long now".

In my first race, I go head-to-head with Will Wilson, and, with the full force of a Ford engine behind me, I blaze past him. There is a brief Real Racing 3 hiatus while I go to Twitter to gloat.

Returning, I discover I've opened up a whole new series of races. Thus, I decide to call it a day before I have to spend the night sharing a sofa with the dog.

I'm really starting to feel the freemium prompts nipping at my heels now, as I struggle from race to race, constantly getting rammed by the curiously aggressive AI and left in the dust on account of my tortoise-esque top speed.

I don't have money, and so an upgrade to the drivetrain for a tiny speed and acceleration boost is the only option I have left open to me. 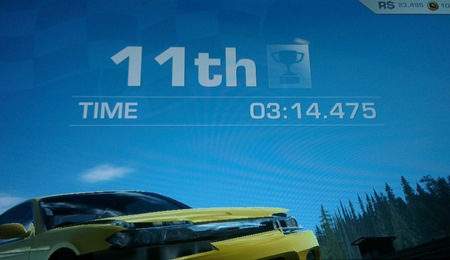 A flurry of podium finishes keeps me in the 'race', and my spirits are buoyed by the increasing challenge. The AI is becoming outright suicidal, though, which leads to me to suspect the game is turning on my pauper nature.

My tired Ford Focus starts to struggle, too. And after a service costing three Gold coins, I'm left with nothing to protect my vulnerable bonce.

Worried, I splurge just over R$ 6,000 on a gearbox upgrade and use the 7-minute delivery window to tuck my baby daughter into bed.

"I'm proud of what you're doing Daddy," she gurgles, though it would have sounded like "Da-da-da" to anyone else listening. 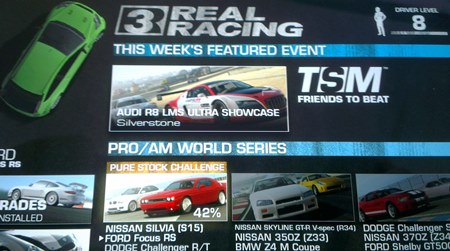 The game keeps teasing me with a Dodge Challenger that I couldn't afford the stereo in, so I realise my Real Racing 3 career may be drawing to a close. Subtle clues like finishing 12th in most races also tip me off.

I can still pay for repairs, but waiting for servicing is out of the question. Somehow, I scrape by just enough to reach Driver Level 8, then squander my tiny stack of Gold coins on an oil and tyre change.

Before I realise what's happening, I've hit the 'service' option with one fewer gold coin than I need to instantly sort my oil. Ergo, I'm staring at a 15-minute wait and a lot of dull grinding that I simply can't justify without breaching my moral code.

It's time to take the key out of the ignition, walk back to civilisation, and calculate just how much entertainment I've managed to get from Real Racing 3 without dropping a (British) dime.