Don't stick to your lane

Rather than steering smelly petrol-fuelled cars, you now control tiny vintage slot-cars as they zoom around a medley of wacky tracks. There's a single player mode with 50 tracks, and when you're done with that you can test your skills in the multiplayer.

Each track comes with four rails to drive along, so rather than steering your car, you need to press left and right to jump across the rails.

Your car will automatically travel at speed, but there is an acceleration pedal that you'll want to use most of time, also. Just be careful about going too fast around corners.

You start at the back of pack, so you'll need to make use of jumping between rails to hit opponents out of your way. You can also drive right up behind them to get extra speed via their slipstream. 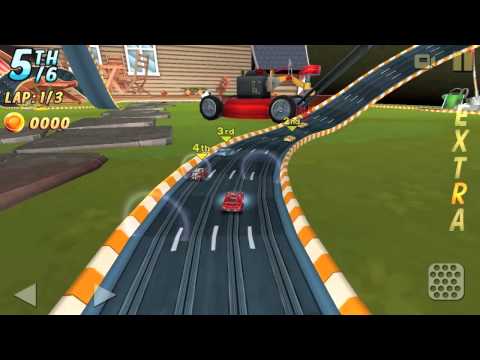 Some tracks also have arrows on them that will either speed up or slow down your car if driven over. If you're really struggling on a particular race, the IAPs offer extra grip and speed boosts at a price.

Android players in select territories (not the UK) can pick up a Limited Edition of Rail Racing on Google Play [download] for free. We're told that the global Android launch will be within the next few weeks.