iOS + Android
| Rage of the Gladiator

One of our jobs here at Pocket Gamer Towers is to sieve through the hundreds of apps that hit the App Store and Google Play every single day and unearth the gems.

We've now tallied up this week's votes - from comments on the site, tweets on Twitter, and votes in our Facebook poll - and the winner is: Rage of the Gladiator (for iPhone and iPad). 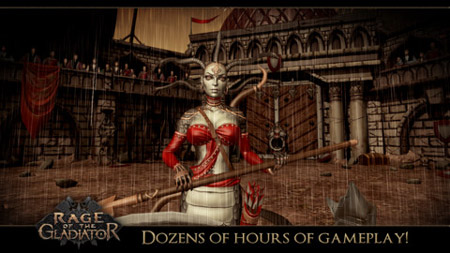 Though originally released as a WiiWare title, Rage of the Gladiator fits perfectly on iOS, nestling snugly alongside Infinity Blade and other gesture-based fighters.

In this iPhone and iPad version, Wiimote swings are replaced with finger swipes. With these swipes, you can pull off the same attacks as the ones in the WiiWare edition, albeit with a lower risk of shoulder strain.

You'll have to use this technique to lay the smackdown on a fearsome collection of monstrous opponents pulled straight from the pages of Greek myth.

In between duelling with crazed Minotaurs and Medusa-like she-lizards, you can upgrade your armoury, and even learn a few magical skills to aid you in the arena.

While it would be easy to dismiss this as just another Infinity Blade clone, the WiiWare version of Ghostfire Games's gladiatorial effort actually pre-dates Chair's sword-swinging brawler by half a year.

What's more, with its responsive controls and entertaining enemy roster, it does a surprisingly good job of standing its ground against its gestural-based competitors.

If you fancy stepping into the amphitheatre with Rage of the Gladiator, then you can pick it up for the temporarily reduced price of 69p / 99c now.

Battle serpentine enchantresses in Rage of the Gladiator on Android

Rage of the Gladiator