Race for the Galaxy, the classic game of space-based strategy, is out right now for iPhone and iPad

iOS
| Race for the Galaxy

Race for the Galaxy is rightly regarded as a classic board game. It pits two to four players against each other in, yeah you guessed it, a race for domination of the galaxy.

And it's now available on the App Store for £6.99 / $6.99. Which is a pretty good deal if you ask me. But what's the game all about? You know, other than trying to literally take over a chunk of space so your friends can't.

Well it's all about phases. There are seven different phases in a game of Race for the Galaxy, and it's up to players to secretly choose which of these they want to lock in. You might want to build a spaceship, or go exploring. You might even fancy a bit of military action.

When everyone has chosen the phases play out in order. So if you've gone for one of the phases that happens later in the turn, then the results of earlier ones might have consequences on the outcomes of your action. 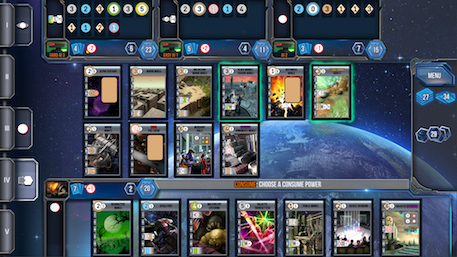 This digital version of the game has five starting worlds and 90 different cards for you to play around with. On top of that it's bundled with a free expansion that gives you another six starting worlds as well.

There are two other expansions available to purchase from within the game as well. That'll be the Gathering Storm and Rebel vs Imperium expansions, if you were wondering.