Capcom's Puzzle Fighter spin-off of the Street Fighter series is one of those games that holds a special place in a lot of hearts, and it seems like it would be a perfect fit for a mobile game.

Yet the new mobile edition of Puzzle Fighter lacks any level of charm or originality, and isn't much fun to play.

With finicky controls and a grindy progression system, you'll be battling the game itself more than you will other players online.

Puzzle Fighter eases you in to the experience with a ridiculously drawn-out tutorial. It explains all the particulars of the game in fine detail before you're allowed to take on a real opponent.

The basic aim of the game is to join falling blocks together in a grid, building up big chunks before attaching a circular block to the group and dealing damage to your opponent. 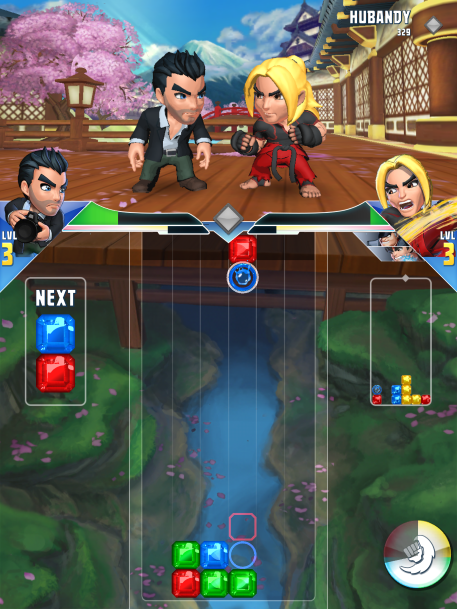 There are four colours of blocks that drop down, and each character has a different affinity which gives them more attack power when you make links of a particular colour.

This system is thrown out the window early on, as really the only strategy in the game is to make as many matches as you can, as quickly as possible, no matter how small.

Consequently, you'll rarely make use of the powerful moves your character can unlock and level up, as making longer combos isn't as efficient as lots of smaller attacks.

So are you, Ken

Not helping things are the controls, which work on a drag and drop system. You also tap to rotate the falling blocks to fit them in the right places.

Make the slightest error of movement and your gems will end up just out of place, by which point you'll have sped up the fall speed and missed your combo.

Get a grip on the controls and finally escape the tutorial, and you'll find that Puzzle Fighter has very little to offer. You can fight online, where you're liable to get destroyed, or against the computer, which is ridiculously easy. 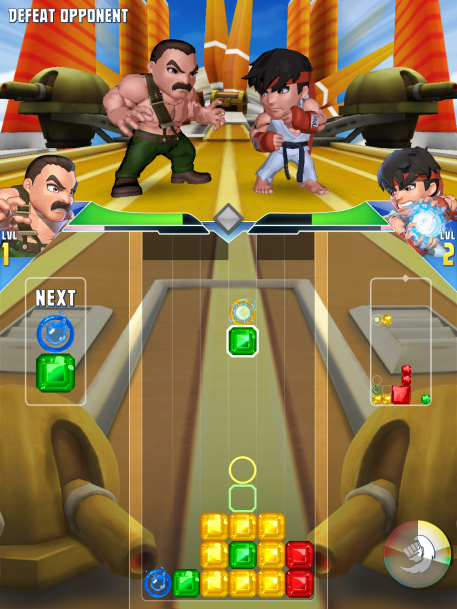 You can only fight against the AI a certain number of times as well before the game shuts you out, and throws up wait timers to prevent you from playing any more.

Playing online is no fun since progressing through the ranks takes a lot of wins and a lot of time, and you're stuck with only one level and a handful of fighters unless you put some serious effort in.

Puzzle Fighter simply isn't enjoyable in any way. Yes, it's cool to collect Capcom characters, and yes, the matching puzzle genre works on mobile, but that's it.

It's a slow, grinding process to move up the ranks and unlock new content, and you can't even enjoy offline play for long before it's locked off.

Persevere and there might be a fun experience to be found, but it's highly likely you'll have switched off long before that happens.

Puzzle Fighter is a grind-filled, boring puzzle game that feels like a dinosaur compared to modern titles
Next Up :
Catalyst Black review - "Gorgeous visuals, smooth gameplay and fun-filled fights"