The Firing Line: 5 questions for PopCap on Plants vs Zombies 2: It's About Time

Lettuce have a conversation

iOS
| Plants vs Zombies 2: It's About Time

Plants vs Zombies 2 is almost here. The hotly anticipated sequel to everyone's favourite lawn defence game will shuffle onto the App Store later this summer.

To find out more about this upcoming game, we chatted to PopCap's senior producer Allen Murray. He told us what's new in this sequel, how the free-to-play nonsense works, and if the game will remain an iOS exclusive.

Plus, we recently got a chance to go hands-on with the game.

In our Plants vs Zombies 2 preview, we said: "Ultimately, this is all going to be a question of balance. We want to find out - is this game made artificially difficult, to push players into buying quick cheats...?"

Let's see what Murray has to say on the subject, shall we...

Pocket Gamer: It's been four years since we last had zombies in our yard. What new stuff have you dreamt up for Plants vs Zombies 2 in that time?

Allen Murray: Mostly, we've been dreaming about tacos. How they taste, techniques in layering the ingredients, and the differences, both philosophical and structural, in soft vs hard shell. And those dreams led us to the story of Plants vs Zombies 2, where Crazy Dave, just like we do, wishes to eat his perfect taco... again.

We've also come up with a bunch of new plant and zombie ideas and some major enhancements to the gameplay.

The first is Plant Food, where each plant has a unique effect that can turn the tide in your favour. Then, there are touchscreen power-ups (Pinch, Flick, and Zap), whereby the player can directly interact with the zombies themselves and change the course of battle.

Last but not least, we've added some fun twists to the core board mechanic so that each world offers something new in terms of the lawn itself.

In the Wild West, for example, there are train tracks that extend along some columns, and you can only place plants on the train cars that traverse the tracks. So, some spaces can't be used for planting, but one plant can be used across multiple spaces by moving the train car along the tracks. 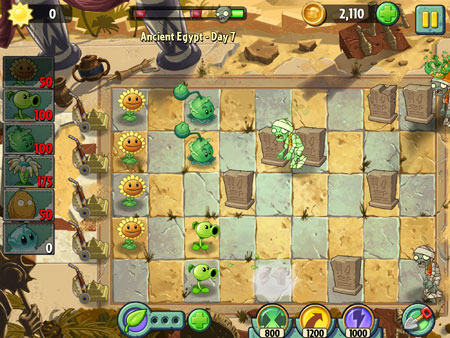 Time travel changes everything. Haven't you heard of the butterfly effect?

In the case of Plants vs Zombies 2, time travel is the way in which we can deliver new time periods to travel to and new zombies to battle.

More seriously, those board mechanics I described before change from world to world. Rest assured that each historical era comes with a slew of themed zombies unique to that time period. 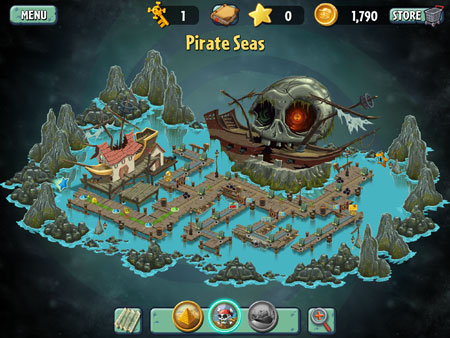 How, exactly, will the free-to-play stuff work? What will people be able to buy, and how will it affect the balance of the game?

We've modelled our game so that a player can unlock any level and fight any zombie without having to pay anything.

We do have a premium store where you can purchase coin packs to spend on Power-Ups and Plant Food pellets (though you'll also earn those coins directly from zombies in the game), as well as a handful of premium plants and upgrades, like the final extra seed packet slot.

In addition, each new era contains bonus paths from where we introduce our Brain Buster puzzles. These are locked behind Key Gates. As you play and defeat zombies, they will drop keys to unlock those gates.

Plus, the portal to the next world is blocked by a Star Gate. After you complete the last level of a world, you unlock the ability to go back in time and replay levels with a new twist to earn stars.

You can unlock both of those gates through normal gameplay. But if you feel anxious to see what is beyond, you can bypass the gate with a real-world money purchase. 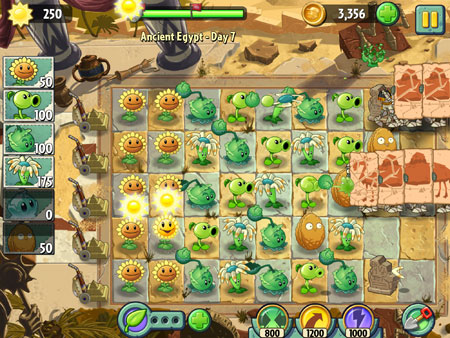 PopCap's decision to make Plants vs Zombies 2 a free-to-play game has been quite controversial. What would you say to players who are sceptical of this change?

Try it! It's free! It's truly been designed so that a player can explore virtually everything at no cost with enough time and skill. There is a limited number of items that are in the premium store, but nothing is stopping you from playing the entire game and having a blast without them.

Our hope is that you'll have so many hours of fun, you will want to spend a few dollars. Nothing, however, will prevent you from defeating every level and all the zombies entirely for free with a well-cultivated garden.

Also, Plants vs Zombies 2 supports multiple accounts on a single device that links premium purchases. So, if I pay to unlock a Brain Buster or buy a premium plant, my kids can claim those on their accounts, too. You know, without having to pay twice.

The balance of the game is not changed in any way. You don't have to use Power-Ups to beat a level, and experienced players will find that they can probably complete most of the Adventure mode without using them. But for new players and even for those of us who are pretty good but sometimes make near-fatal mistakes, it's nice to have a backup plan. And they are fun to use.

Finally, each world has a competitive Challenge Zone, where you play endless levels and compete to see how far you can get. In that mode, we actually limit your purchasing capability so that it is definitely NOT a pay-to-win experience. I think sceptical players will be pleasantly surprised. 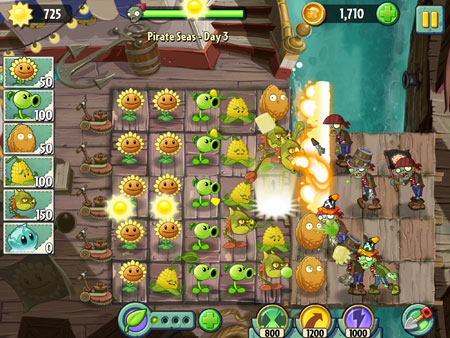 Why did you choose to go iOS first with this one? And on what other platforms do you plan to release Plants vs Zombies 2 in the future?

Plants vs Zombies has had reasonable success on many platforms, but the largest and most consistent group of PvZ players is on mobile, which maps directly to the shifting casual audience. By and large, PopCap is focusing on mobile first right now, so it makes sense that Plants vs Zombies 2 follows that.

With regards to Plants vs Zombies 2 on different platforms, I don't have anything concrete to say. Rest assured, though, that we will make sure the game will be a great experience on every platform for which we adapt it. And quality takes time.