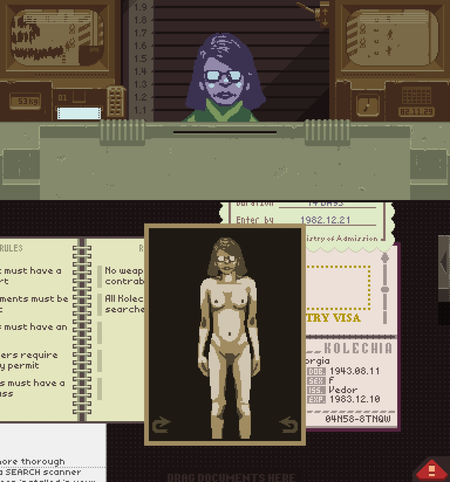 You can now see all the bums, boobies, and willies you like in Papers, Please, as Apple told developer Lucas Pope that his pixelated nudity was, in fact, allowed on the App Store.

Previously we told you that Apple rejected the first version of Papers, Please for iPad, and said it wouldn't sell the game unless Pope covered up those naughty naked bodies with digital underwear.

He also said that the Apple representative "made it clear that their concern was not the pressure [from press / players], but the mistake on review."

The game has now been updated, and the nudity option is back. It's off by default, but if you'd like to get an eyeful of 8bit schlong, turn it on in the options menu. The update also changes the game's rating to 17+ and adds leaderboards for the Endless Mode.

Papers, Please has made a speedy return to the App Store [Update]