PaperLander, a tappy tilty game about rockets, mazes, and lasers is the winner of the Big Indie Pitch in Brighton

The crowd isn't hushed. It chatters, clashing drinks, discussing business and the games they've just seen. But the winner of the Big Indie Pitch is announced none the less.

It's Paperlander. It's sort of a mix of Little Big Planet and Flappy Bird. An awfully clever concept that feels better in the hand than it does described.

It's a game about guiding a rocket through a maze. A delicious touchscreen amalgamation of ideas that crackles every time you tilt your device. 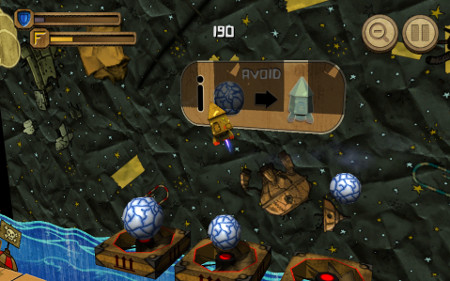 The pitch is sporadic. Nikos the developer has lost his voice. He holds up pre-written cards, apologising for his broken vocal chords and explaining the ins and outs of the sharp arcade blast.

There are a hundred levels, or there will be. But we get to play a handful.

Tap the screen to make the rocket fly, tilt your Android or iOS device to guide it on its way.

It sounds simple. And it is. But there's a pulse to the game, something in the tapping and the tilting that makes me want to fight Nikos as he tries to take the phone away from me at the end of his three minutes. 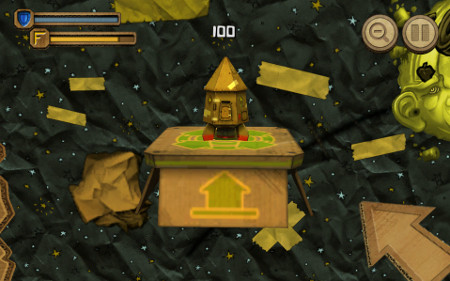 Everything is smooth and neat. Hints are worked into the background of the boxed-in levels, guiding you through the simple physics based puzzles you need to complete to continue.

I shoot upwards, nudge a metal lid so it flops over to block a laser, then float across the now-safe area the red hot light has vacated.

There's a rock to push, another lid to flip, and then some glass to smash through. I collect stars and other glowing goodies, before successfully landing my paper rocket in the end zone.

And I want to do it all over again. There's a smile on my face after that brief little play. It's smart, simple, and so much fun to play. 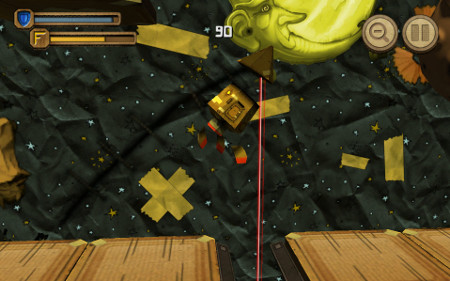 The game has a papercraft aesthetic. Its mazes and ships are ripped little things, bright corrugated pockets in a deep black world.

And they all move how you want them to. It's a splendidly solid experience, full of sweet quirks and sharp ideas. It's a puzzle, a dexterity test, and an action game all rolled into one.

Playtime comes to an end, the pitchers shuffle around, and I want to poke a little paper rocket around some more.

Brighton is on the cusp of night. The sun is collapsing in to the sea, the clouds burst red. The drinks are still flowing and a man who can't talk has won a BIP branded baseball bat and the acclaim of a room full of slightly drunk journalists.

[Update: other games from the Big Indie Pitch are listed here.]

PaperLander is a fun physics-based puzzler featuring a papercraft spaceship