These days, it seems like video game character can't stay in the genres they're known for.

At first blush, it's easy to dismiss Pac-Man Monsters as Puzzle & Dragons with Pac-Man tacked on - but there's actually a good bit of commitment to the Pac-Man theme that sets Monsters apart from, ahem, the pack.

You'll need to draw lines between coloured gems to make matches and, as with Puzzle & Dragons (or almost any other match-three RPG) the monsters you control will attack when you match enough gems of their colours. 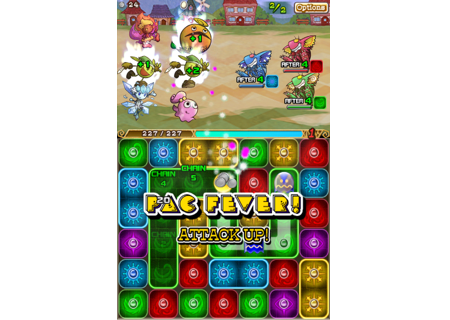 Here Pac-Man Monsters takes an interesting approach and drops the game of Pac-Man, ghosts and all, onto the gem board.

Ghosts will block your progress - meaning, you can't draw matches through them - but they'll turn blue and vulnerable if you eat (trace over) a power pellet first. Gobble up some fruit while you're down there, and your monsters will recover some HP.

Outside of that, there are some features that it seems no F2P match-three RPG can come to the market without - namely, monster evolutions - which make Pac-Man Monsters feel a bit convoluted.

Still, it's a bright and polished free-to-play puzzle RPG bursting at the seams with Pac-Man references and sound effects - so, it might be worth a download if you know who Inky, Blinky, Pinky and Clyde are.