Out at midnight: OLYM is another combat-puzzle game from the creators of MUJO

Once more into the labyrinth

If the Silver Award-winning Greek myth-inspired puzzler MUJO was to your taste, then its creator's next game will be of interest.

It's called OLYM and will be available as a free to play title on iOS tonight. And yes, you'll be happy to hear that it's another fusion of tile-based puzzling and combat with a Greek myth theme.

However, from what I've played of OLYM, it seems to be a little easier to get to grips with than MUJO, at the expense of some of its complex design.

Whereas in MUJO you might have spent a while deliberating over a single move or two, in OLYM, you can get quite a flow going through its puzzles. That said, it seems to get tougher later on.

The idea is to defeat all of the enemies in a level to beat it. Each of them has a number and an icon tied to them. So, to beat them you need to collect that specific number of tiles (or more) with that icon on it.

You do this by tapping on one of the tiles, at which point, any tiles with the same icon on it that are adjacent to it are sucked up into that one tile. 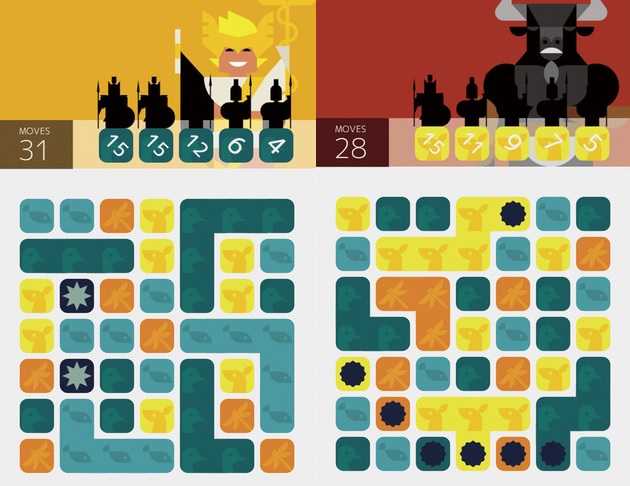 You can keep sucking in more tiles as long as they are either next to it, or in the block of tiles connected to it. The catch is that you're given a limited number of moves to defeat each enemy.

So the tactical side here is reducing the number of moves you make by bunching tiles together as much as possible. However, you don't want to put all tiles bearing a certain icon in one large group as you'll waste them all on a single enemy.

It's different enough from MUJO to warrant some time investment. And, while it may is simpler, it seems to retain that compelling puzzle challenge too.

Make sure you check OLYM out when it arrives on the UK and US App Stores at midnight.