Available now on iOS and Android

Oku Game – DJ Runner has one of the titles where it pretty much covers everything itself. It's a runner where you play as a DJ. It's available now on iOS and Android.

You'll play as the titular Oku who is based on a Finnish DJ called Oku Luukkainen. Luukkainen is well-known for his love of Eurodance music which the games' soundtrack is inspired by albeit with a retro-sounding spin on it. The game will also feature some other well-known Eurodance artists making cameo appearances in pixelated form.

The game is very much 90's inspired. Your health bar is a pizza that depletes in slices when you take a hit and you'll collect CD's to improve your score. The enemies you have to avoid or shoot once you've acquired that ability are ninjas because why not I suppose. You'll also have to avoid hitting, shooting or landing on old ladies too, because that's obviously not cool, not even in the '90s. 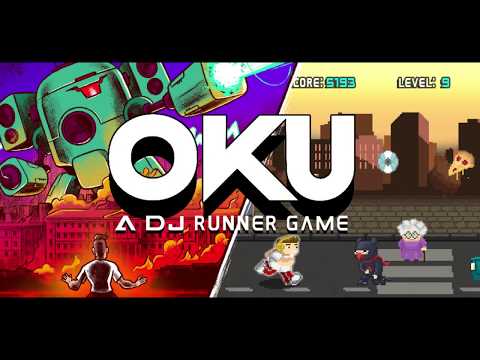 At the end of each level, you'll play a little minigame for an opportunity to increase your score. This can simply be tapping the screen to simulate texting, dodging fans throwing things at gigs or sorting fan mail into different piles. Not exactly revolutionary ideas but it's good to break up the running with something a little different from time-to-time.

The game was designed by Felicia Prehn who is legally blind. So the game has particularly taken colour-blind players into account with its design which is great to hear. The more people who can enjoy gaming the better.

Oku Game – DJ Runner is available now on the App Store and Google Play. It's a free-to-play game that appears to have no in-app purchases, only pop-up ads with no apparent option to remove them.