Having played the game a couple of years back it's nice to see Octodad: Dadliest Catch proving once again how awesome and frustrating it can be. Except, on the Switch this time.

It's had a few tweaks since its Steam days and comes alongside the two shorts released separately, and that's not a bad deal for $15.

Nice suit you've got there

If you couldn't guess from the title, Octodad follows the story of an octopus who pretends to be human, falls in love with a reporter, marries, and become a dad to two human kids. Don't ask.

You enter the game on your wedding day and have to adjust to your wildly flailing limbs during a series of menial tasks, like finding keys and clearing spaces. 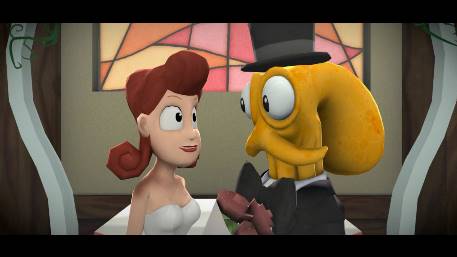 Once you're dressed the part, make it down the aisle without rousing suspicion, and marry your wife, the real game of life begins.

Throughout the game you head from your house to the grocery store to the aquarium, all while performing everyday chores that we wouldn't bat an eye at.

Trying to complete these tasks with your cephalopod-bod is another thing altogether though. Different buttons control different limbs, so it's all about coordination if you want to keep your secret under wraps.

The stakes are upped when you move to the main event location - the aquarium. Here you're not only surrounded by fish, but marine biologists that'll sniff you out in a heartbeat. Plus, an angry chef that tries to expose or kill you at every given chance.

Young Horses has done a brilliant job with the Switch port. The sound is crisp, the colours are clean, and the gameplay is every bit as entertaining and bug-free as it ever was.

Your limbs are quite unusual

Interestingly, some areas in the game have been changed up to make it easier than the previous versions. For example, the soda mountain in the grocery store is against a wall now, making it easier to climb.

Whether you're happy or sad about these little tweaks depends on your personal taste and how much you like a challenge. 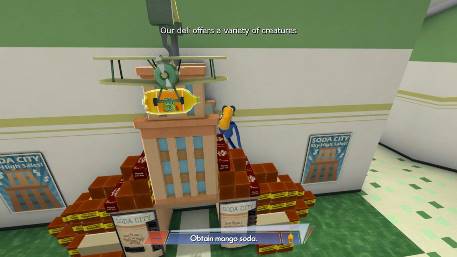 The story carries things along, and the humour is what holds it up, but eventually it falls prey to its original shortcomings. It all gets a bit repetitive.

Aside from a quick section in the arcade, you spend the majority of the game retrieving things to solve puzzles and moving from place to place. This applies to the story 'shorts' included as well.

It's an effective method and mostly entertaining, but it would've been nice to see something more inventive and exciting to freshen things up.

Oh, you're an octopus

If you've already played the game, or own it on another platform, I'd give it a pass, since there's nothing different here to experience.

Despite a couple of gripes, Octodad: Dadliest Catch suits the Switch well. Whether you're playing on your own or arguing with up to three other players with the drop-in co-op mode, you're bound to have a fair bit of fun with it.

Octodad: Dadliest Catch doesn't offer up anything new, but it's still just as fun as it ever was
Next Up :
Evony: The King's Return review

Octodad: Dadliest Catch - Catch of the day or sleeping with the fishes?