North Wind: Trill of Consciousness turns navigating the world of an RPG into a puzzle.

Have you ever played that group party game in which you split a person into head, body, and legs? Each person draws a body part without seeing the others', and then you put it together afterwards.

North Wind's puzzles are based on that idea. Instead of splitting a person into three, though, you split the environments into top, middle, and bottom.

This means that you can be in a jungle at the bottom of the screen, a cave in the middle, and a temple at the top at the same time. You simply swipe the section of the screen you want to switch when not standing in it.

In total, there are eight worlds and 512 possible combinations to explore in this non-linear fashion. And you have to make use of the way the different worlds match up (or don't) to get to all of the different sections.

North Wind: Trill of Consciousness is as much an RPG as it is a puzzle game, mind. Along the way, then, you'll battle creatures by bumping into them, as in roguelikes. Battles are best avoided, though, as you're guaranteed to take damage here.

You can also level-up by collecting dark orbs scattered around the worlds.

North Wind: Trill of Consciousness also feels a bit like a Metroidvania at times, as you'll need to find items to open up new areas with your new abilities. I obtained a bracelet that let me smash through boulders, for example. 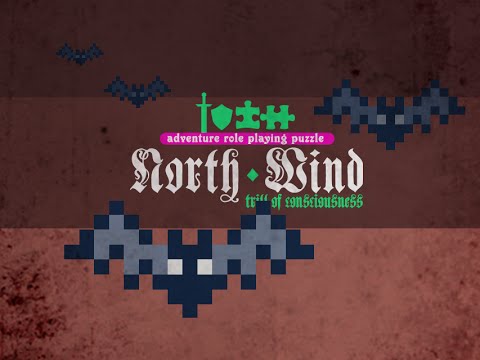 You also become an invincible werefox when near vampires. Oh, and later in your quest to save your love, there will be five bosses to tackle.

North Wind: Trill of Consciousness is a unique experience. The most unusual thing about it is that world-swiping mechanic. If you've got a spare 69p / 99c, then you may want to pick this intriguing game up.

Do note that there are IAPs on offer for health items if you want them. You shouldn't need them if you're careful, however. As, of course, you ought to be.