Get them whilst they’re hot

You’re almost guaranteed to make a concept more exciting by adding ‘…but in space’. It’s The Good, the Bad and the Ugly, but in space. It’s The Simpsons, but in space. It’s The Hidden Fortress, but in space.
Noodles Now! is a free-to-play runner game… but in space. On Mars, to be precise. And you’re not just running for the sake of it; you’ve got piping-hot noodles to deliver and customers to keep happy. You’re also not strictly running but zooming round on a flying scooter.
Developed by Golden Monkey Media, Noodles Now! received its App Store debut recently, and is sure to appeal to anyone who wants a light-hearted, casual game to test their reflexes.
Get your Martian delivery career off to a flying start with these handy tips. 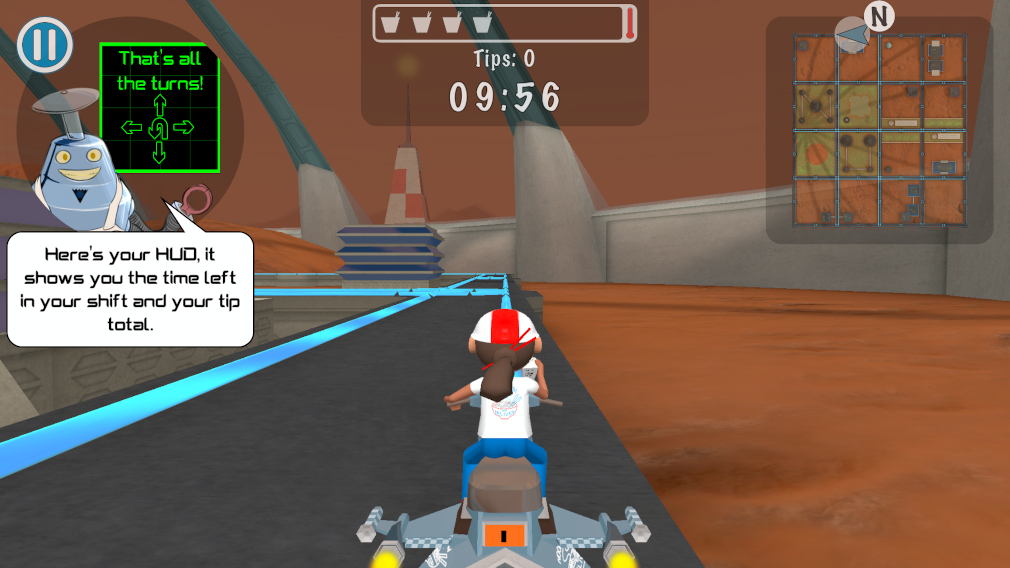 Get a handle on your steering
The controls in Noodles Now! are simple enough. Swipe up, down, left and right to move up, down, left and right respectively. Unusually for a runner, you can also pull a U-turn by making a ‘U’ swipe, allowing you to turn back and deal with anything you’ve missed. Although the controls are easy, timing your swipes is the tricky part. As you navigate the bendy roads of these space cities, keep an eye out for hazards. UFOs will attempt to beam up your noodles, giant worms will blast you with icy breath, robots will attempt to snatch your tips and fellow space-road users will get in your way. All the while, the clock is ticking, and the customers are waiting. Make your delivery on time, though, and good things will come your way. 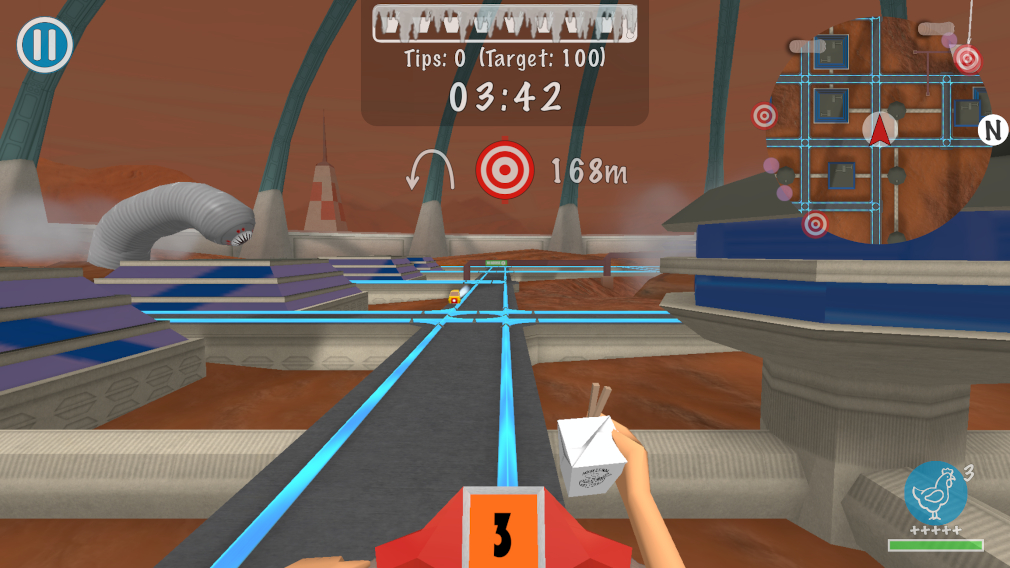 Choose your view
Noodles Now! lets you switch between third- and first-person views simply by tapping your character. Test both perspectives to find out which view you’re most comfortable with. Switching to the third-person angle is especially useful during missions where you’ve hitchhikers aboard.
To further help your navigation, tap the map to alternate between a fixed, full-city view and a moving local-area view. In the options menu, you can also customise which side of the screen your head-up display appears – left-handed players may find switching from the default particularly useful. 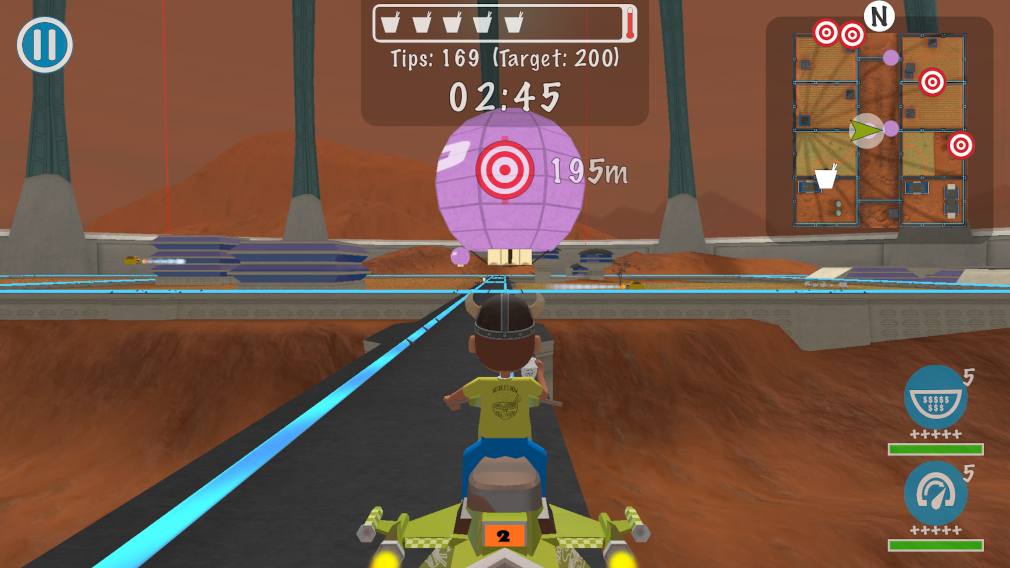 Pick up the pick-ups
While whizzing between deliveries, keep your eyes peeled for purple lanterns and try to fly through them. By doing so, you’ll be rewarded with a random pick-up, ranging from always-useful speed boosts and noodle warmers, to situational hitchhikers of the farmyard variety. These can be triggered at a time of your choosing by tapping the icons on the bottom right of the screen.
Speaking of picking things up: when you crash into a flying car, you might drop some of your tip money – but this can be retrieved. When you respawn, you can fly back to where you crashed and re-collect it (if somebody else hasn’t beaten you to it). 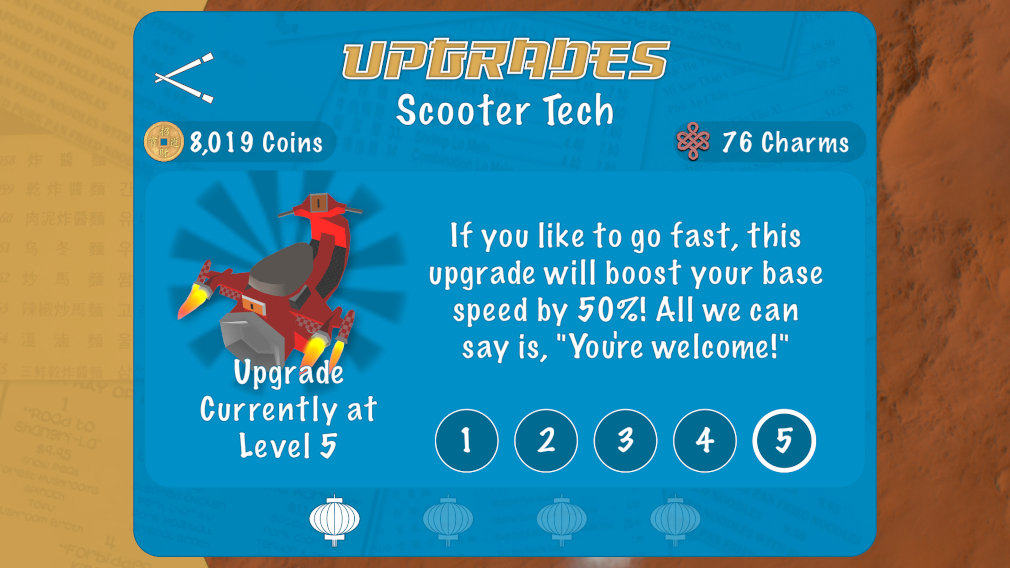 Upgrade your delivery
The tips you get from stellar delivery service can be spent on cosmetics, including a paintjob for your scooter and silly hats for your driver. But ‘charms’ – awarded at the end of each mission for doing exceptionally well – can be used for a lot more. In the ‘Upgrades’ menu of the main screen, you can spend charms on upgrades for your scooter, your pick-ups and your noodle carrier. Upgrade your scooter to improve its responsiveness and speed; your noodle carrier to increase its noodle-carrying capacity; and your pick-ups to carry more and make your boosts last longer. We recommend you use the first charm you earn during the tutorial mission on the first-level scooter upgrade, which lets you fly higher.
You also collect coins, which can be spent on game-changing extras, including special hats. These grant you permanent bonuses when you have them on, whether it be bunny ears for unlimited speed power-ups or a smile-inducing jester hat which will glean you more tips.
Now you’re ready to become the best noodle delivery driver this side of the Red Planet. Download Noodles Now! for free from the App Store.

From time to time Steel Media offers companies and organisations the opportunity to partner with us on specially commissioned articles on subjects we think are of interest to our readers. For more information about how we work with commercial partners, please read our Sponsorship Editorial Independence Policy.
If you're interested in becoming a Preferred Partner please click here.
Next Up :
6 games that were added to Huawei's AppGallery in November 2021