Being a detective in Noir Syndrome is pretty hard.

Sometimes, you accidentally try and steal from the Mob and get shot in the spine before you get a chance to explain.

Other times, you forget to eat and get really, really hungry.

Then, there's the brutal murderer wandering around your city stabbing people in gruesome ways. And you've only got 13 days in which to stop him.

That's the setup of this intriguing procedurally generated crime adventure. You have to visit a bunch of locations, gathering clues and tips as you do. Visiting one takes a day off your total.

When you think you've got enough evidence to accuse a suspect, it's time to point the finger and see if your deductions are on the money.

The gunplay is fast and brutal, with a single shot enough to take down anyone in the game. That includes you, so you've got to make sure you know what you're doing before the bullets start flying. 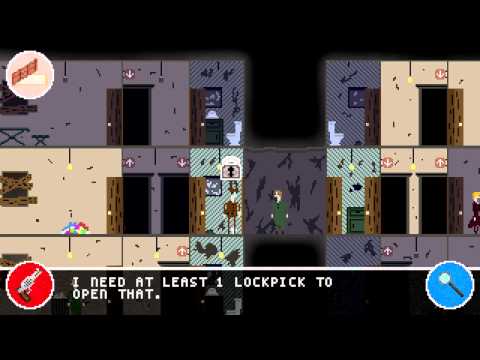 The controls are simple enough. You tap on the screen to move left and right. You use the 'gun' button to shoot and the 'magnifying glass' button to interact with the world.

Every time you play, the game generates a new mystery for you to solve, so you've always got a fresh crime to get to the bottom of.

Noir Syndrome is certainly an interesting mix of ideas, then. It's pretty hands-off, too, letting you explore the possibilities its dingy city has to offer.

There's definitely a lot to like here. In my brief session playing it, though, I did sometimes feel like I was wandering around without enough of a clue to get the job done.

Still, it looks gorgeous, and it's full of possibilities for exciting and emergent play. You can even just sit in your house for a fortnight if you want.

Someone's been bumped off, see?