After a vast development period, the much-anticipated open-world sci-fi MMO from Archosaur and Famous Heart Limited Noah’s Heart has officially launched in North America and Europe.

In case you haven’t stayed caught up on all things Noah’s Heart, the core design philosophy behind it tries to keep that huge open world and player interaction as the focus. You’ll have seamless access to the entire map all at once without any invisible walls or other such nonsense, and instead, you can pick a direction and run that way and end up exactly where you started as you traverse the entire planet in full. There’s a variety of biomes on display here, ranging from icy tundras to deserts, rainforests, and more. Given the distance, there are also numerous ways to traverse this planet, including things like horses, jetpacks, and even boats! 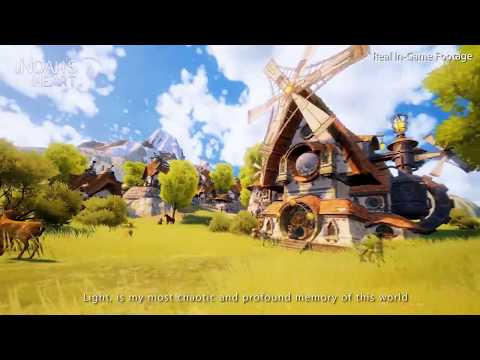 As for the gameplay, you can expect thrilling combat after you choose from a wide variety of weapons when you first start the game, and those weapons will replace the traditional class system. These can also be switched around as you progress further and will eventually end up as a huge amount of options for your own customizable combat systems. You can also team up with in-game NPCs called Phantoms to help you out too, or team up with your real-life friends and tackle dungeons and raids and other pieces of content!

So, if a content-packed, socially rich, beautiful vibrant open-world MMO sounds up your alley, Noah’s Heart is perfect for you! If you’d like to give it a go, you can check it out at either of the links below! Alternatively, you can also check out the official website for a deeper look at the mechanics and gameplay systems.

Looking for more multiplayer open-world goodness in your pocket? Check out our Top 15 Android MMOs!
Next Up :
Pokemon Go is collaborating with Chatime by converting the stores into PokeStops and Gyms