Niffelheim sees you becoming a brave warrior whose soul has become trapped in the titular realm. So, you will need to battle through the numerous dangers that reside there on a journey to reach Valhalla. That's a tall order, so we decide to send in our most elite warriors, the App Army.

I had seen a couple of YouTube guys I like play Niffelheim and was excited to hear it was coming to mobile devices. I can see myself keeping this on my new tablet to enjoy during this Christmas season. The cold, wintery Norse theme is really a nice change from many of the survival games I am used to playing. You basically start the game as a Viking who needs to find food and improve his shelter in order to survive. I initially explored to the left and right of the map and found an NPC in a building/cave who gave a quest and offered a throne to sit on to regain my health. I returned here after I accidentally let darkness fall and made the mistake of trying to fight a wolf and some skeletons in my weak state.

Upon death, I had to return to my corpse and then hoof it back to heal. I like the difficulty that nighttime brings since it adds to the atmosphere and challenges. Quests may involve looting certain items or killing certain things and allow you to explore to find out more about the world. I was reminded a bit of Kingdom New Lands but with combat and more survival aspects like gathering food, wood, and other materials. The controls worked fine for me but I am thinking they could make for a cluttered screen if you play on a smaller phone screen. The graphics have a nicely detailed style and have a cold, unforgiving look to them that fits the game. The sound is decent from the sounds of animals scurrying to chopping wood or fighting skeletons.

Chasing down wee animals can be a bit of a pain but it again, adds to the challenge. I have only ducked my head into the dungeon a bit but I love the fact that you have to take risks sometimes for the rewards. Delving into the dungeon is a bit uneasy at first but I understand it is where I need to go to succeed and level up further. I am quite please with Niffelheim so far and look forward to dedicating some time to it next week when I am off work leading up to Christmas. It has a great blend of combat and survival with Norse inspired storytelling that just works for me. It is well worth the asking price for a full console-like gaming experience.

This was a good example of a side scroller. There were several worlds to play in, each with its own theme. The gameplay itself was challenging enough to keep me interested and the background sounds weren’t bad either. With items to collect, enemies to kill and animals to catch for food there was certainly plenty to do.
There was one small gripe I might have liked fixed, which was that on the larger iPad I had difficulty reaching all the left-hand controls and at times used my right hand to press them instead. But apart from that, I found it an enjoyable game and although I didn’t have time to play it as much as I would have liked, it’s definitely staying installed to be visited when I do.

Apologies for being late. Niffelheim is what used to be called an arcade adventure, with RPG elements. The gameplay is confined to left and right scrolling 2D plane that your character can go into the screen to enter buildings and dungeons. As you try and survive in the afterlife you battle various monsters, get sent on errands by NPCs and die a lot. Death comes easy in Niffelheim and you are going to die a lot. Thankfully restarting is quick and you can hunt your body down to restore the items you collected.

Gameplay is let down by the onscreen controls, lots of buttons make controlling your character frustrating at times on a phone. Also collecting stuff to complete errands can get tedious. Still, there is a lot to do in this game, the graphics and sound are good, recommended.

First things first. Controls are simple and effective. I did find that I had trouble hitting my four-legged hunting targets at times, even when I was right on top of them. But I feel like that made it a little more realistic. That animal is going to do its best to get away from you when you’re swinging a sword at it. The only issue I have with the controls is that when I tap and hold to learn more about an item, the info is sometimes easily hidden by my thumb. And it’s not always precise. The sound was nice and moody and drew me in. I usually turn the sound off on games but this time I didn’t. And in the maybe four or five hours I’ve put into it, I’ve seen zero IAPs so that too I’m a fan of.

As for the visuals- I’m kind of hard to please on 2D scrollers because they make me feel like the universe you’re in is kind of limited and linear. The few that I’ve fallen in love with are generally moody and artistic as far as backgrounds and details and creatures and just the general mood that they generate. Niffelheim ticks all of those boxes masterfully. From the entrance facades to the various places you’ll go, to the lonely thrones you can sit upon to regain your health and the vast and varied backgrounds. 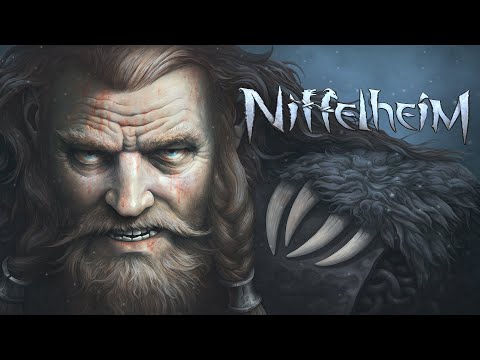 It’s simply a stunningly gorgeous visual experience. Plus the weary way your character trudges along the landscape, limping when he or she is injured. The tutorial helps you get started but also the game doesn’t hold your hand after that. It took me a while to build and craft to the point where I could go out and start to hunt, and dungeon crawl and reasonably expect to make a fair amount of progress without getting killed.... and then having to go find my corpse so I could come back to life.

You can succeed at this game if you work at gathering and crafting and upgrading, and there are multiple levels to conquer, so plenty of surviving (and being reborn) await you. You can also play against multiple AI opponents, (which I haven’t tried yet, to be honest) and while other platforms allow for multiplayer co-op games, I don’t know if the iOS version allows that.

There are threats that materialize regardless, though I don’t want to deprive you of the thrill I had when I saw a little warning flash on my screen. All I can say is prepare to defend what you have, whether you’ve opted for AI opponents or not. And I’ll tell you what occurred to me as I was catching on to that. Just because you’re dead and headed to Valhalla, that doesn’t mean they can’t kill you again. And again. Buy the game. Enjoy.

The gameplay is pretty much what you'd expect from a crafting-survival game. You chop trees to gather wood, mine for stone, forage and hunt for food, craft weapons, armour and tools and upgrade your shelter. But there are also some welcome additions that keep the game from being monotonous, like dungeons to explore and quests that you receive from some rather interesting characters. The art style is beautiful and during my play, I encountered no bugs. The only thing I missed is controller support (I hope it will come in the future since the game was previously released on consoles). Overall, if you like survival games you'll certainly have fun with this one.

Niffelheim is a “Crashlands” meets “Craft the World” for me. Nice audio and voice (what little I’ve encountered) that doesn’t get overly trite as you play. Be prepared to read a lot during the tutorial but I would highly recommend doing so. Tapping and holding to bring up information boxes on items can be quite clunky and annoying on a smaller screen. Combat is a simply 2D melee/ranged system that works well for the game. There are several “levels” to the crafting that unlock with certain materials and building upgrades that very much remind me of the armour types you could get in the aforementioned Crashlands.

Your character can sometimes miss your intended target but the movement is for the most part fluid and easy to accomplish. I was happy to see the “satiety” system not become something you have to babysit but the weapons and tools certainly have to be monitored or you will find yourself several layers deep in the mine when your tools break. All in all, a very competent mashup of base defence, collecting and crafting. You will certainly be able to sink many hours into this title. 6 hours in and I have quite a bit more to accomplish.

I remember watching a few videos about this game and I got very excited about it. I have to say the game met if not exceeded the expectations. It offers a very rewarding experience, with elements of RPG, gathering and crafting, and a great story (as far as I got). There is a lot of text in the tutorial, but I highly recommend following it as it makes the game easier to play afterwards. The combat system is very good, and I haven’t found any bugs so far that hinder an enjoyable game experience. My only critique is that it doesn’t support a controller (as others have said), but maybe that can be solved with a later update. I definitely recommend it.