The HTC One is here, and it's gunning for smartphone supremacy

There can be only One

HTC has just unveiled the handset which it believes will reverse the company's recent downward trajectory and inject new life into its fading brand.

Its name: the HTC One.

Instead of a composite casing, the HTC One's chassis is 100 per cent aluminium, manufactured using a process called "zero gap construction". 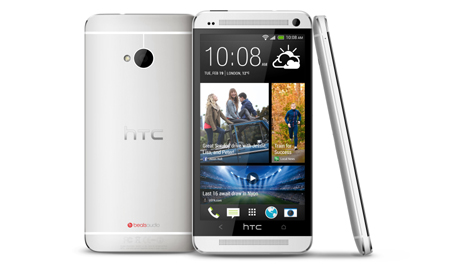 Underneath its metal exterior, you'll find a 1.7GHz quad-core processor nestled next to 2GB of RAM.

Blink and you'll miss it

Rather than funnel all of its R&D budget into creating the most powerful handset on the planet, HTC believes that its upgraded Sense 5 Android skin - complete with new clock and smarter icons - will win it fresh admirers.

At the centre of this new UI is "BlinkFeed", which aggregates info from numerous press sources and social networks to create a single stream of browsable news.

Interestingly, the HTC One packs a rather modest 4-megapixel camera. However, the company was quick to stress that while these "UltraPixels" may be relatively few in number, the HTC One's camera sensor actually collects up to 300 per cent more light than the average smartphone sensor.

While we're on the subject of silly buzzwords, the HTC One will also sport an impressive pair of front-facing stereo speakers, courtesy of its new "BoomSound" technology.

If you want to get some more boom in your sound, the HTC One will be available globally from over 185 mobile operators, including T-Mobile, AT&T, and Sprint, from March.