Make Facebook your Home with the incredibly social HTC First

Do you really Like it? Is it, is it wicked?

It's been a long time coming, but HTC has finally revealed its new Facebook-powered mobile handset. As you might have guessed from the headline, it's called the HTC First.

The result of a collaboration between the Taiwanese manufacturer and Zuckerberg's social networking empire, the HTC First will play host to Facebook's debut mobile app suite, Facebook Home.

Though HTC's mid-range handset will still be an Android device at heart (running Android 4.1, to be precise), it will be the first blower to come pre-loaded with Facebook's socially focused Home skin. 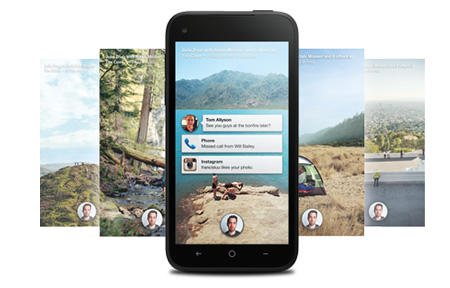 Boot up the HTC First, and you will be presented with an animated photo sourced from your Facebook feed. By swiping left and right, you can scroll though other images. By double-tapping the screen, meanwhile, you can 'Like' the selected photo.

Touching the circular profile photo at the bottom of the screen grants you access to your apps and Messenger (an amalgamation of Facebook Messenger and your regular text message stream).

If you want to bring up the more familiar Android menu, you can use the dedicated Home 'Menu' button located beneath the screen to do so.

You can drag apps from this menu into a launcher for quicker access. 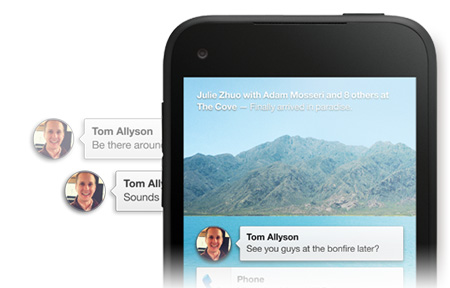 You can even drag your friends onto your home screen. Through a system called "Chat Heads", you can place a circular icon of one of your buddies on your launch page.

By tapping this image, all activity relating to that person will immediately be shown. This will allow you to easily engage in conversation with that buddy.

As for the HTC First unit itself, it's a fairly unremarkable mid-range smartphone.

It sports a 4.3-inch 1280x720 screen, boasts a 5-megapixel camera, and is powered by a 1.4GHz Snapdragon dual-core processor. You'll also find 1GB of RAM and 16GB of internal storage under the HTC First's hood.

If you're based in the US and would like your friends to "live at the heart of your phone", you'll be able to purchase the HTC First from April 12th. Pre-orders are now being taken, with AT&T offering the handset with a two-year contract for $99.99.

UK citizens, meanwhile, will be able to purchase the HTC First through EE sometime this summer.

Curious parties will also be able to download Facebook Home from Google Play onto compatible 'droid-powered HTC and Samsung handsets from April 12th. You'll need to be running Android 4.0 or later to download it, mind.