Just like last year, Apple is hosting a special one-day Black Friday sale in the UK and US today, slashing the prices of products across its iPad and iPod touch range.

Yes, that includes the latest models of each.

So, you can pick up a 16GB iPad with Retina display (the new one with the Lightning connector and the A6 CPU) for just £368 - that's £31 off the usual price.

If you're after something a little cheaper, don't forget that Apple's now selling the faithful old iPad 2 as its budget tablet model. You can pick up a wi-fi-only version of Apple's second-generation tablet for just £308 today. That's a saving of £21. 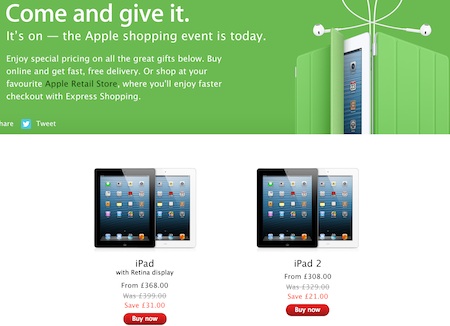 If you're after the most cost-effective route into iOS pocket gaming, though, you'll be wanting an iPod touch. They are, after all, essentially iPhones with the phone bit (and half the price) lopped off.

The good news is that the entire iPod touch range is included in Apple's Black Friday sale, so this could be your perfect opportunity to jump onto the most vibrant gaming platform around.

Apple's still selling the previous-generation iPod touch, too, by the way, and these have also come under the Black Friday sales hammer. Both the 16GB and the 32GB fourth-gen iPod touchs are currently on sale for £15 less than the usual price.

Those are quite some savings when you consider that Apple gear usually stays at pretty much the same price until it's replaced.

Build and protect your planet in Survival Galaxy, out now in Germany on Android

Wildshade is all about horse racing, out now on Android and iOS