Need for Speed: No Limits - hints and tips for playing without spending

Do you know why it's called a joy ride? Because it's much more enJOYable to drive a car that you haven't spent any money on. Obviously.

Instead we've put together a series of hints and tricks so you can play Need For Speed: No Limits in the way whoever thought up the title always intended - without any limits.

Okay there'll still be limits, in fact there'll be quite a lot of limits, but your level of disposable income won't be one of the limits.

There'll be grind, there'll be times when you have to put your phone or tablet down and just let the game be, but there'll be no reaching into your real-world pocket.

And hopefully there'll be some fun as well, because after all, that's what we're all here for. Well, it's what I'm here for, I'm not so fussed about the rest of you.

Before we start with the money-saving tips, let's look at the basics. The basics are you're driving a car. A super-fast car. But the ultimate goals of your car-driving are earning cash and reputation.

If you're after cash there are a few things you can do to ensure you get it. Namely driving like a total lunatic. Power-slides, drafting, and "sick" jumps all throw more cash into your pocket. 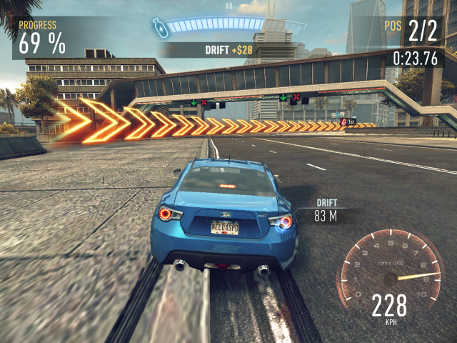 It's best to do these things on races you're certain you're going to win.

Learning to drift around a corner, then kicking in your boost to straighten out your backend is a really important skill, and when you get it wrong you're probably going to lose.

This will mean replaying plenty of levels. But you've only got the chance to replay certain ones at certain times, so while you're doing that, check what cars you need new blueprints for so you can increase your roster. 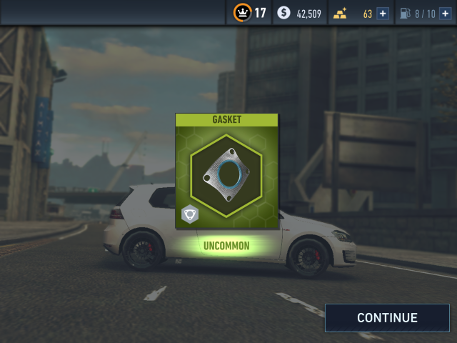 Parts and blueprints are also hugely important. Blueprints unlock new cars as well as upgrading ones you already own. Parts boost your speed a little as well – the better the part, the more it'll add to your vehicle.

There's an MMO-style grading system for cars and parts, rated from the rarest to the most common. It's worth considering what you're actually stuffing into your vehicle. A common part might give you a bit of a boost, but it'll fill up a space and you might unlock something better soon.

Different cars open up different series, thus giving you more things to actually do. If you're focusing on just one car you're going to hit walls after a few hours that you're not going to be able to get past. 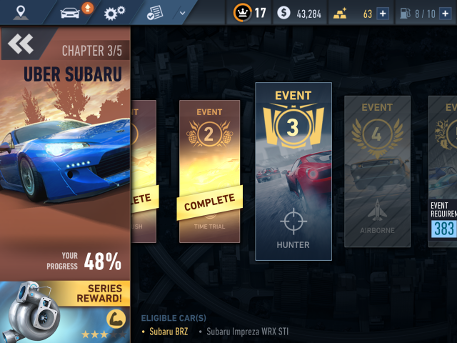 You'll get two cars for free, and should making getting a third your top priority. Check which cars you've got the most blueprints for, and focus on doing things that'll get you more. Make sure you're getting a car that will unlock some new races as well.

Once you've got a new car, try and work on collecting blueprints that will upgrade the three you have.

You'll find yourself hitting a barrier with cars with lower ratings, which is what you'll be able to afford, and adding new blueprints to them will give you more scope for adding better parts.

What to spend stuff on

Spending your in-game cash willy nilly will, unsurprisingly, not get you the best rewards. You should be splashing your cash on crates, but look to see what the crates actually offer before you jump in.

When you replace parts of your car, you're given the choice to sell the original part or keep it any pay some cash. Look at what the part is, whether it's better than things installed on your other cars, and whether it's worth trashing before you decide to sell it. 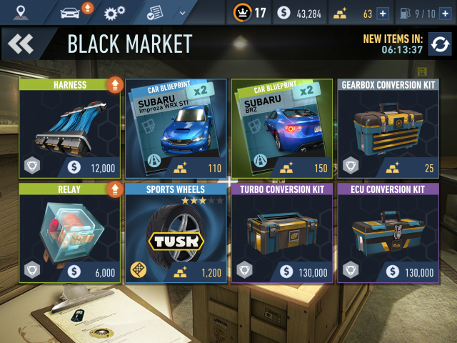 When it comes to the gold currency, while it's tempting to splash it on special crates, it's a better idea to save it to flip cards in random parts drops. This way you can make sure you get what you're looking for rather than another dodgy spring.

It'll also leave you with spare gold to fill up your petrol tank when it runs out.

The gauge also refills when you up your reputation level, so don't spend until you're totally empty otherwise you might be wasting precious resources.

The tournaments offer chances to race without spending fuel. Instead you spend tickets, which recharge at a different rate.

You'll also earn trophies and visual points, which you can spend on tournament market-exclusive goods and making your car look shiny respectively.

It's always worth spending your tickets, even if you're not going to win the tournaments, you're going to earn some extra goodies for just participating.

Plus some of the early races are easy enough that you can throw in some drifts to make a bit more money. 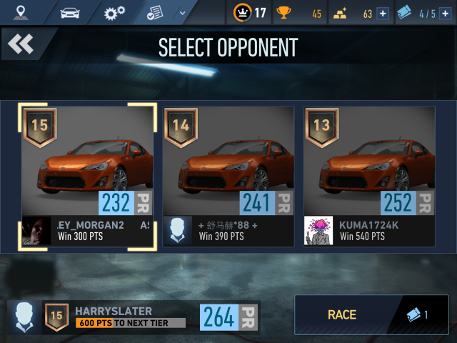 Don't take on more than you can handle though. Losing races loses you tournament points and means your rewards come the end of the challenge period won't be as good.

Make sure you use your free crates when they become available as well. It's a good idea to check in every day as well, as there are rewards for regular play.

You can check cars in the garage to see where you can get the blueprints to make them from as well.

If you play smart, then there's no need to ever spend a dime on Need for Speed: No Limits. Granted, you'll be limited, but if you're happy to grind your way to the top, and you follow these tips, you should be able to do it. Eventually.

Discover the world of underground car culture in Need for Speed: No Limits now visually overhauled for SHIELD Tablet K1