NBA Now is the latest in a line of official NBA titles to be available on mobile devices. This time around Gamevil have created NBA Now where you'll become a General Manager and build yourself a team with various NBA starts with the aim of winning a championship. It's available now for iOS and Android.

The game is designed to give fans of the sport a simple way to play basketball when they're out and about. It can be played entirely in a vertical orientation and the gameplay is all done with one-touch controls to increase the appeal to casual players.

Gamevil is hoping the game will appeal to more hardcore players as well though, despite a seemingly simplistic sounding control scheme. With a focus on the General Management aspect of basketball, players will have control over nearly every aspect of the team so that they can get their squad playing their brand of basketball. 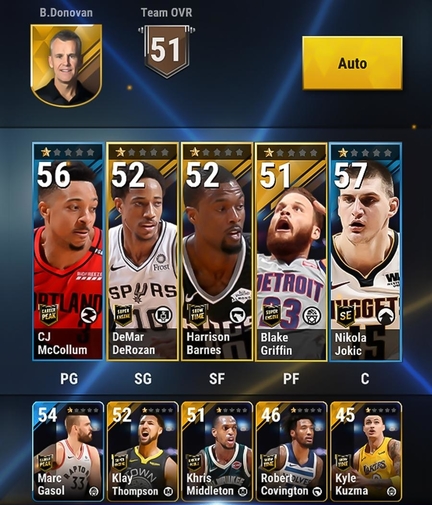 The action on the court is also under your control as well, to an extent. The movement of players is controlled automatically but it'll be up to you to decide whether they drive, pass or shoot on offence with various blocking options when on defence.

Players are obtained through cards, which is where the free-to-play aspect of the game comes in. You'll be able to earn in-game currency to purchase new cards with but if you're willing, you'll also be able to put down real money to get new players as well.

Real-life basketball can also play an impact on the game too. Not only will players stats be updated based on their real-life counterparts performances but you'll also be able to predict the results of games each week. Getting them correct will net you some rewards in the game itself.

NBA Now is available now through the App Store and Google Play. It's a free-to-play game with in-app purchases.