Among the reams of new features to be unveiled at launch is some big news that Talking Tom and Friends fans will be thrilled about. The new game unites the entire gang together under one roof, meaning players will be able to befriend and look after all six characters at once – for the first time ever. 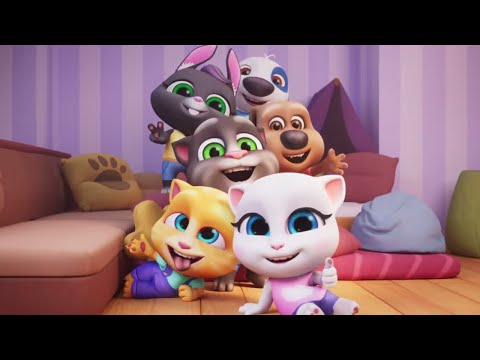 My Talking Tom Friends is the most advanced game of its kind to date, using a sandbox approach that will allow users to play any way they want.

So who's this game for? Well, just about anyone, as it so happens. The success of the franchise has been owed in no small part to its universal appeal and the connection fans form with the characters, and My Talking Tom Friends promises to be no exception. As a global leader in the virtual pet category, Outfit7 promises to excite and engage dedicated fans of the franchise with this exciting new game, and surprise new players with its endless fun and entertainment.

Players of all ages and skill levels will find something to enjoy here, whether it's caring for their house of virtual pets, putting their problem-solving skills to the test in some fun-filled mini-games, forming friendships with the lovable cast of characters, or tinkering with the extensive customisation options.

There's a ton of fun to be had here for families and gamers of all types, so if you'd like to join Talking Tom and Friends as they move into their brand new house, be sure to pre-register right now over on Google Play.

What's A Preferred Partner Feature?
From time to time Steel Media offers companies and organisations the opportunity to partner with us on specially commissioned articles on subjects we think are of interest to our readers. For more information about how we work with commercial partners, please read our Sponsorship Editorial Independence Policy.
If you're interested in becoming a Preferred Partner please click here.
Next Up :
Genshin Impact version 3.5 leaks reveal new characters and returning events