Morphite is going to be compared to No Man's Sky. And it's certainly an interesting comparison to draw. Both of them are chasing a similar concept of scope, but they go about it in very different ways.

At least to begin with No Man's Sky felt a little aimless. Here was a massive universe, go and do what you want. So long as what you wanted was jumping around a planet wondering what you were supposed to do.

Morphite goes in the opposite direction. It hints at a huge universe of possibilities, but it's a much tighter, more direct game. And it's all the better for it.

After a bit of preamble, the game launches you into space. You're exploring planets, scanning different forms of life, and trying to find out more about the titular element.

Everything is presented in delicious blocky 3D that's got a unique swagger all of its own. For the most part you're playing an FPS, controlling your character with floating sticks and buttons. 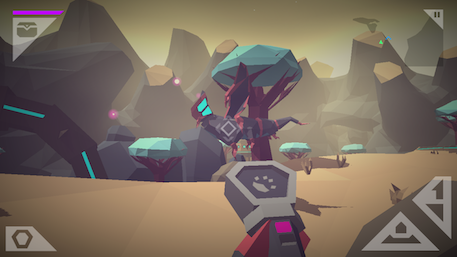 And the whole thing works really well. You've got a bunch of different tools at your disposal here. Your scanner lets you record the local flora and fauna, and a handy pistol lets you fight back if they get grumpy.

You'll get grenades too, and a beacon that lets you summon your drop pod to your current position. When it comes to the space sections you're just plotting jumps. You'll need to refuel as well, and deal with pirates and other events when they crop up.

The levels themselves are neatly put together. There's some jumping, some shooting, and some simple puzzle solving. Get to the end and you'll push the story along, opening up more worlds to explore.

You can wander off of your own accord if you want, but there's a push to find out what happens next, and rewards for sticking to the quest path. 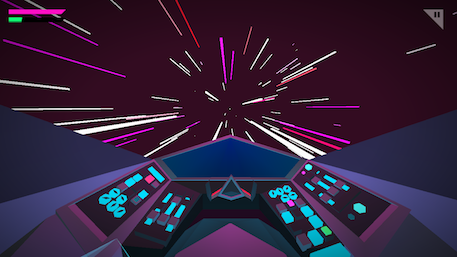 And the thing is, the game really makes you feel like you're part of some huge space opera. You're not the lone protagonist bimbling around, there's a cast of characters here, and finding out more about them is half the fun.

Where some of Crescent Moon's other big games have felt almost empty, Morphite is bustling by comparison. There's always something new to scan, or some huge creature to try and shoot to pieces.

This is an adventure that gets by with the illusion of scale. But it does it in such clever ways that its linear progression slips by almost without you knowing.

You never feel lost, but you always feel like an intrepid explorer out on the fringes of the galaxy, uncovering mysteries as you go.

And that, quite frankly, is one of the finest pieces of gaming sleight of hand I've seen in a good long while.

While it might draw comparisons with No Man's Sky, Morphite heads out in its own direction, and it works much better
Next Up :
Turtle Beach Atom review - “A stylish-looking controller that's let down by being adventurous”