It's still going to take awhile

Morphite is a first-person sci-fi adventure that emphasizes exploration over combat. Its massive universe of procedurally generated solar systems offers a seemingly endless supply of worlds to discover and creatures to research, while its main story provides direction and motivation for traveling the galaxy.

Our heroine, Myrah, begins her journey merely as a specimen-scanning assignment for her guardian, Mr. Mason. After uncovering a mysterious temple on one planet and a power long thought lost, her travels begin to unravel a deeper story.

Much of the joy of Morphite is discovering this story with Myrah while planet-hopping and upgrading the tools that allow you to explore any nook or cranny in the farthest reaches of space. Our tips below are designed to help you jump-start your journey and make it more productive without spoiling the game's plot or its many wonderful surprises. 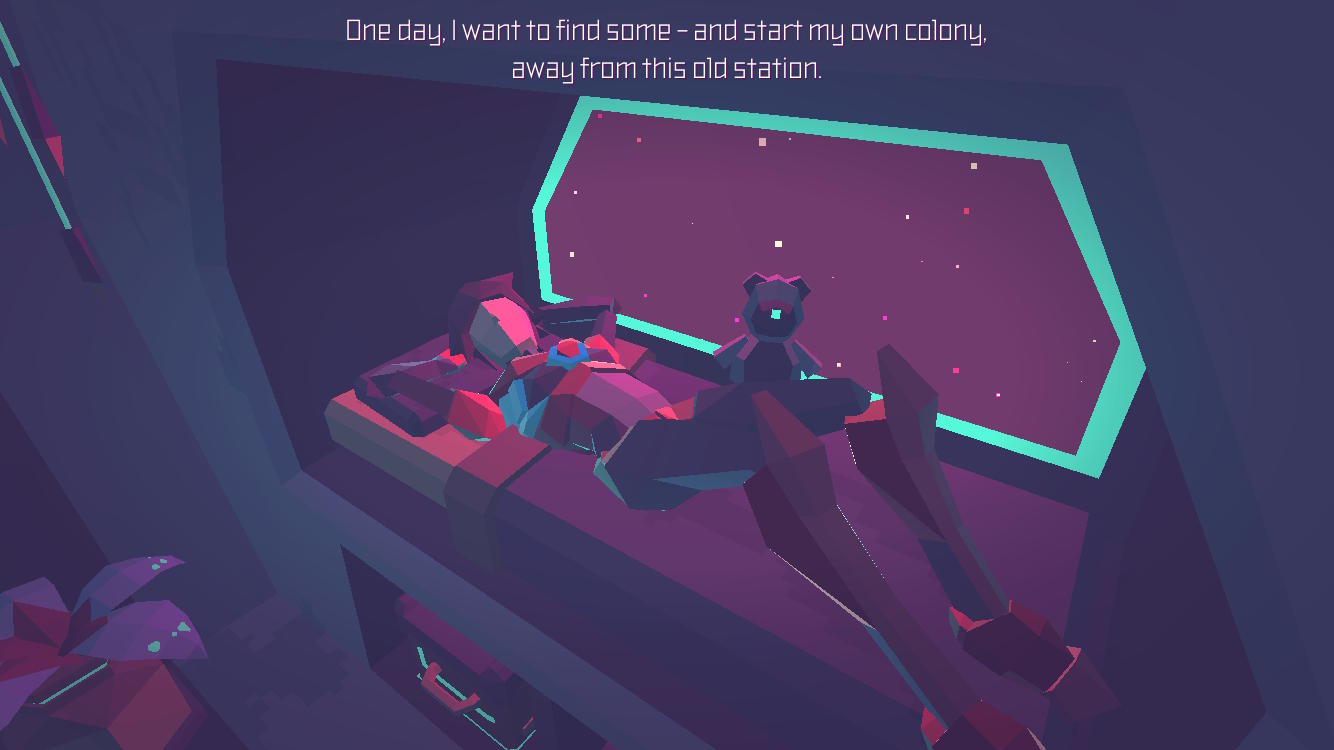 Get a move on

Our first recommendation as soon as you gain control of Myrah is to adjust the camera sensitivity. Tap the pause button in the upper-right corner, choose Settings, and then the Controls tab. We upped X and Y aim, as well as move sensitivity, to about 75%. This makes it easier to spin around, adjust your direction while jumping, and just generally have better control over her movements. Play around with the levels to something you're comfortable with, but aim for higher sensitivities overall.

There is no fall damage in Morphite, so when you're out exploring, feel free to dive off cliffs and don't worry too much if you miss a jump. You can also breathe underwater indefinitely from the beginning of the game—no upgrades required—so don't feel rushed when exploring bodies of water.

Emerging from underwater will propel you upward a short distance, so if you need some extra jumping height to reach an area, try to find a body of water nearby. You can go underwater, then hold the jump button until you surface and gain a few extra feet towards your goal. 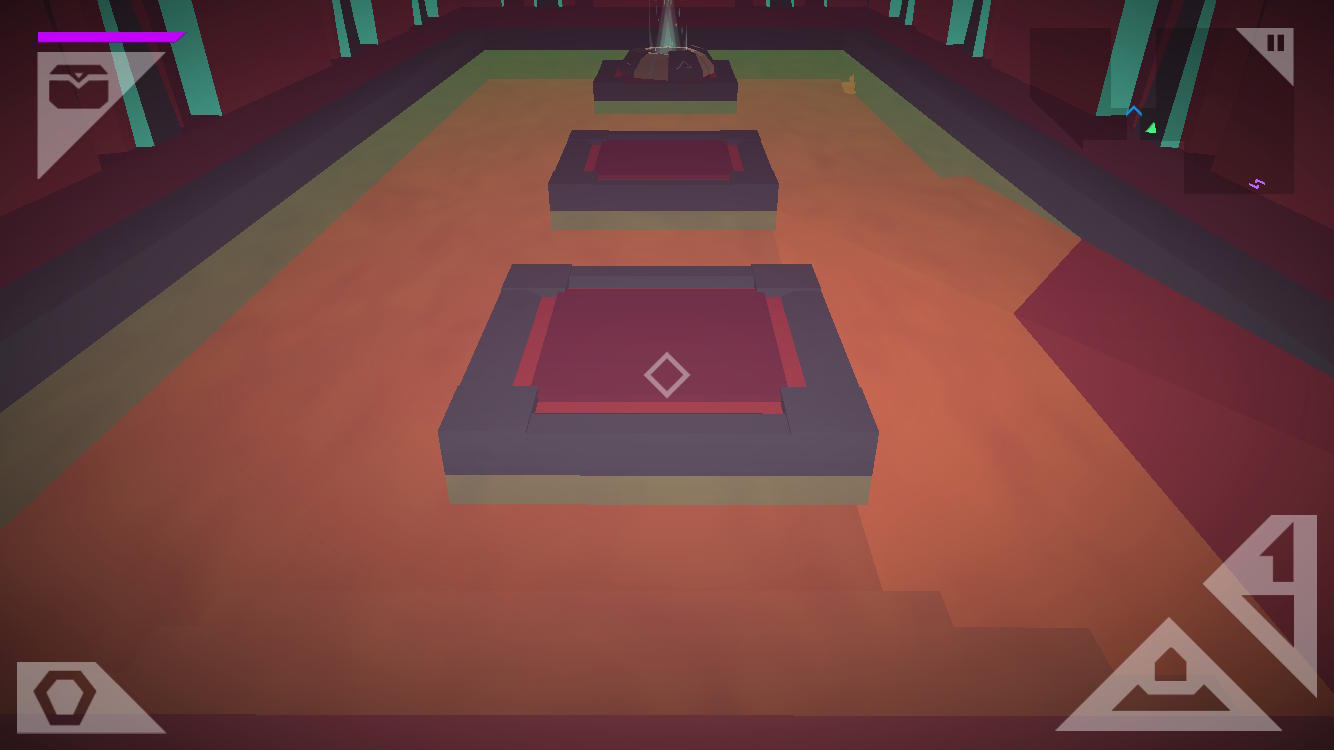 When jumping and trying to land on a specific area—like a platform in the middle of poisonous water—look down. It's easier to know when to stop if you can see where your feet are currently. If you need to take a running jump, look down while running and jump just before you hit the edge of your current platform. When trying to climb a hill or generally work your way up terrain, look up.

The geometry in Morphite is more forgiving than it first appears: while a hill or platform may look too steep to climb, you can often jump your way up almost anything with enough persistence. If you've ever played an Elder Scrolls game, the physics here is very similar. Look up towards where you want to reach and jump while moving forward into the terrain. If you don't move, adjust left or right slightly and keep jumping. As long as Myrah finds a tiny foothold somewhere, she will keep moving up. 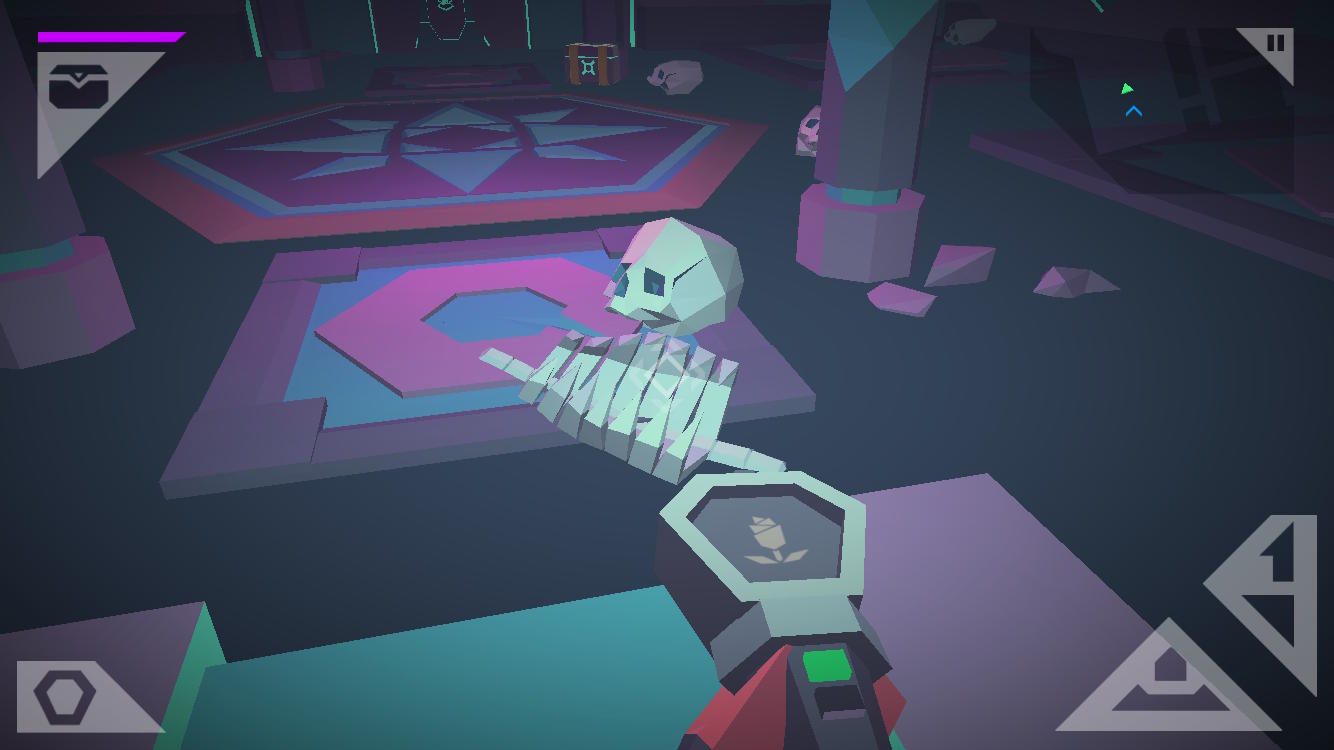 One of the first items Myrah receives is the Scanner, which allows her to take scans of plants, creatures, and other materials she finds on planets. Scanning objects has two distinct benefits: it unlocks special upgrades for Myrah's suit and it provides Chunks, the money in Morphite.

Upgrades are unlocked simply by scanning plants or creatures which contain a certain specialty, like heat resistance or survival instinct. To actually apply these attributes to her suit, Myrah needs to find a converter chamber—these are scattered around the universe and can show up almost anywhere, even underwater—and have the required resources in hand.

To earn money off of scans, you need to visit any space station within a star system. Space stations are the large, pointed icons on the star map. When arriving at one, you can choose to Explore, Upgrade (the ship), Sell Scans, Repair Hull, or Refuel. Explore will actually send you into the space station, where you can run around and open crates, complete side quests, and generally kill time while your ship refuels automatically. 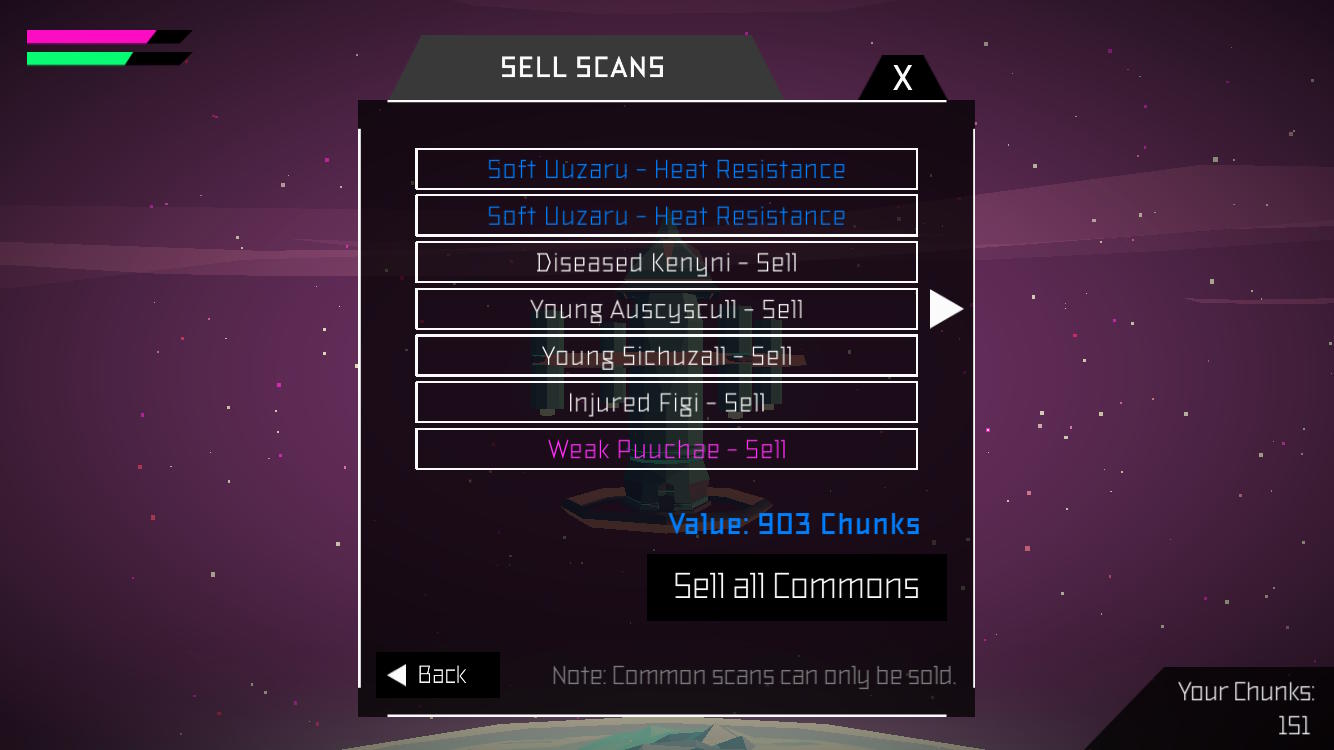 To earn Chunks, you'll want to select Sell Scans. This will show you a list of all scans currently in your possession. Blue scans are rare materials which teach upgrade abilities. You can sell rare scans individually by tapping each one and choosing "Confirm sale." White scans are common and can be sold in bulk by selecting "Sell all commons."

You can only hold one copy of a scan at once, but after you sell it, you can go get another copy of that same scan. So if you find a lucrative planet with valuable scans, you can visit a station to sell off the scans you've collected then return to that planet and gather more scans from the same creatures.

Rare organisms can be scanned multiple times in a single visit and you can hold numerous copies of the same rare scan. This seems like it might be a bug in the current version, but this is an easy way to earn extra Chunks: when you find a rare creature, scan it over and over again to collect multiple copies of its scan, then sell the duplicates off at a station. 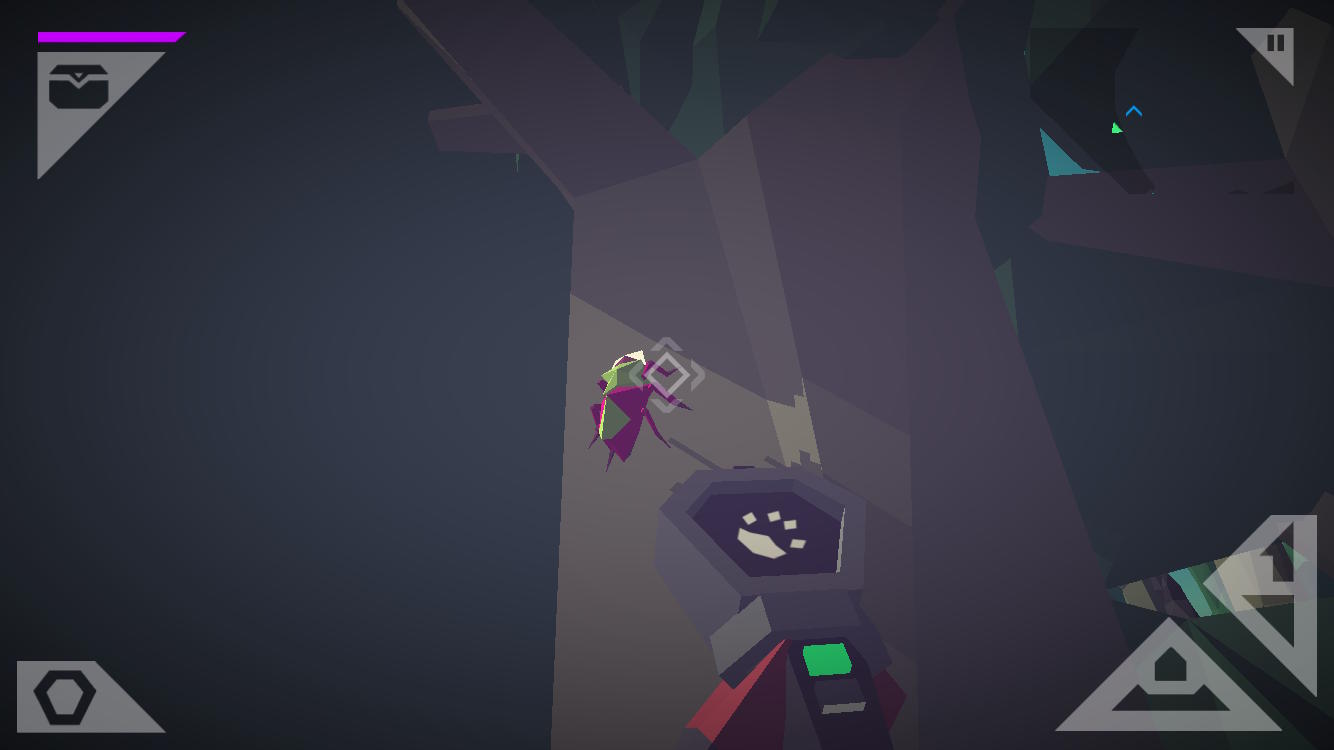 The art of scanning

We've covered selling the scans you gather, but actually gathering them can sometimes prove tricky. When exploring a planet, we always have the Scanner equipped as our default weapon. Switch to the Plasma Pistol or other gear as needed, but return to the Scanner when wandering and exploring.

When the Scanner is out, if you get close to a scannable object, an icon will flash on the Scanner's screen which indicates what type of organism it is (plant, animal, mineral, etc.). This is an easy way to know if something can actually be scanned as well as what you're currently pointing at if two objects are close to each other (like an insect sitting on a tree).

If you tap the action button when the Scanner is equipped, its beam will shoot out and remain out until you come across something that can be scanned—you don't have to hold the button down. Keeping the Scanner active like this is another quick way to confirm what can be scanned and whether you've already collected something.

This also makes it easier to scan moving creatures: turn the Scanner on and then move toward the animal until it registers. If it continues moving, walk with it or adjust your aim to follow it, letting the Scanner run automatically. If you approach skittish creatures slowly—just barely tilting the virtual joystick—they will typically not be scared off. (This also works for sneaking past aggressive enemies without attracting attention.) 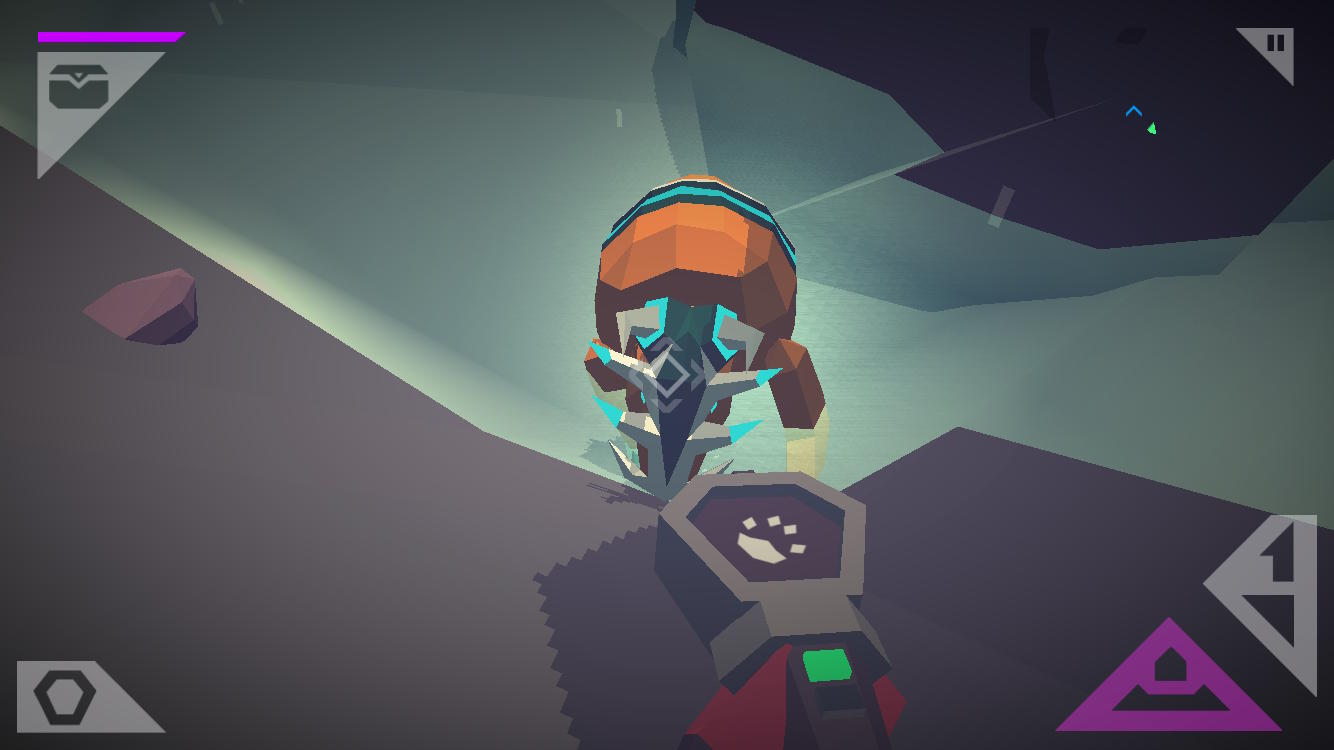 Be sure to scan creatures first before killing them. When they die, they disappear and do not leave a body behind to scan. If you're trying to scan an aggressive enemy, use geometry to your advantage. Creatures will often get stuck running into walls or slopes, so lead them toward higher ground and then jump up and scan them from above. Flying animals or insects usually land eventually, so keep watching to see when they stop and scan them then.

Even if an object looks familiar or like something you've already collected, scan it anyway. There are often different types of the same species—like healthy versus diseased—and some different species simply look similar. In the first temple you visit, there are over a half dozen vines hanging from the ceiling which all look roughly the same, yet each one can be scanned for a different entry. 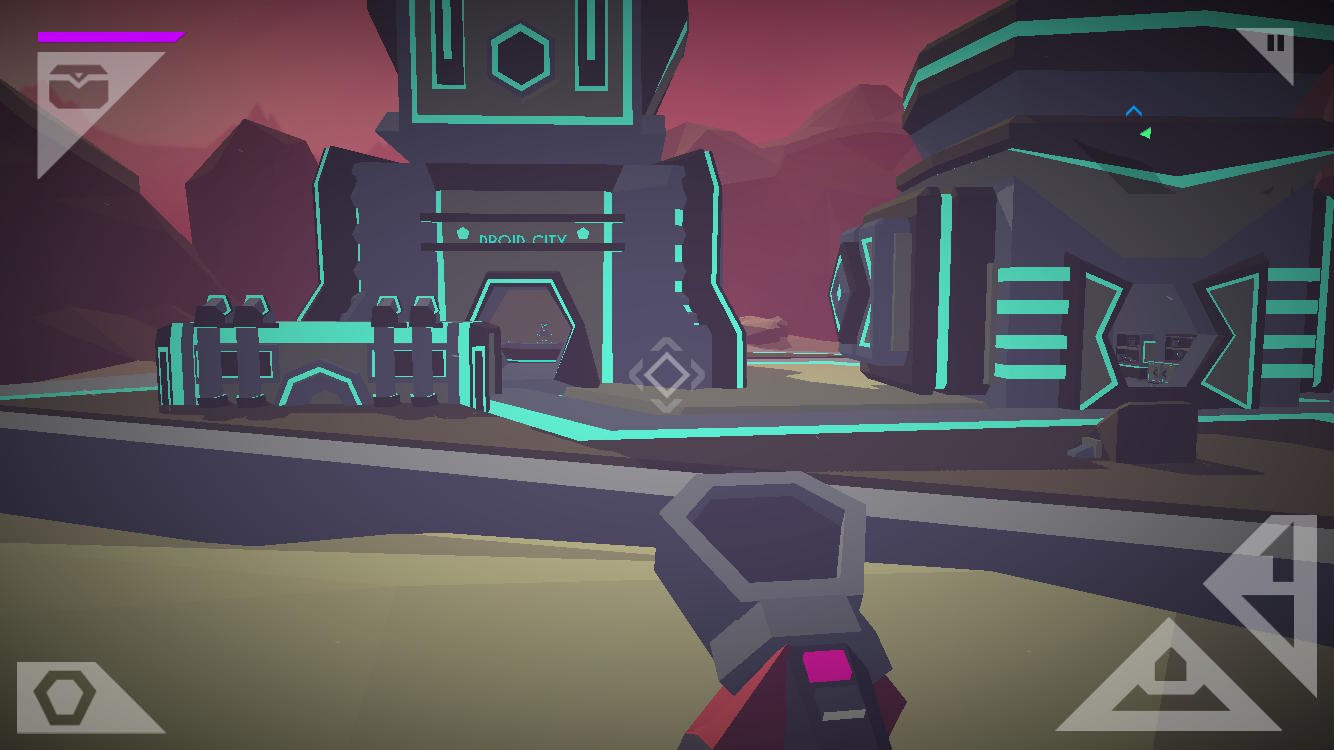 While we recommend following the main story through at least the first two planets at the beginning—to unlock a specific item—you're free to branch out and explore wherever and however you like at any time. The game will always track your next story location as a green planet on the solar system map, so you can always return to it whenever you're ready.

We do suggest, however, keeping notes on anything of interest you find while traveling. If you find a particularly useful shop—like one that sells resources—note its location. Side quests are listed in your mission log, but they aren't especially detailed: noting which planet, roughly where it is in the star map, and where the quest giver is on the planet can help make the open universe a little more manageable.

The map notes recent systems you've traveled to via a light blue line showing your previous trajectory, so you can use this to backtrack. But after visiting dozens of systems and planets, it can be easy to forget specific locations. Stations do change composition on subsequent visits, so if there was a shop or side quest on a station, there's no point in writing it down. However, because of this, you can return to stations numerous times in a row and find new crates—and sometimes missions—each time. 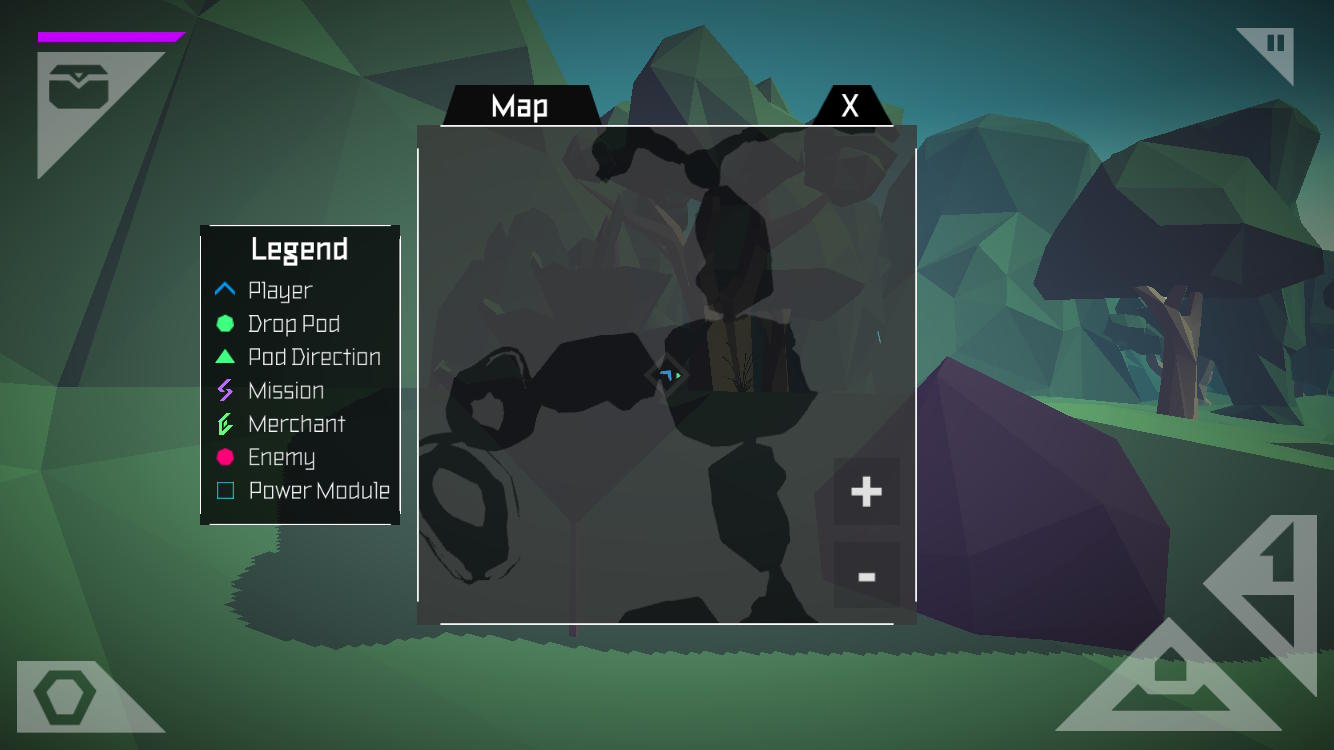 While exploring a planet, be sure to use the mini-map regularly. If you tap the map, a larger version will appear in the center of the screen. You can continue walking and scanning while this is up, so use it as an overlay when you're trying to reach a specific destination.

If you end up far away from your Drop Pod (the large green dot on the map) and don't feel like backtracking, use your Beacon to leave the planet. The Drop Pod always lands in the same starting location, so you can quickly return to where it was simply by going back to the planet from the star map.

Myrah's health regenerates when not being attacked, so if you get into a losing battle, retreat until she regains her HP and then reengage if needed. Use geometry and jump to higher ground to get away from non-flying enemies. If you die on a planet, you'll be returned to your ship in orbit above it, but you'll keep anything you unlocked—even if you died while scanning an aggressive creature, if the scan finished, you'll have it in your inventory after dying. 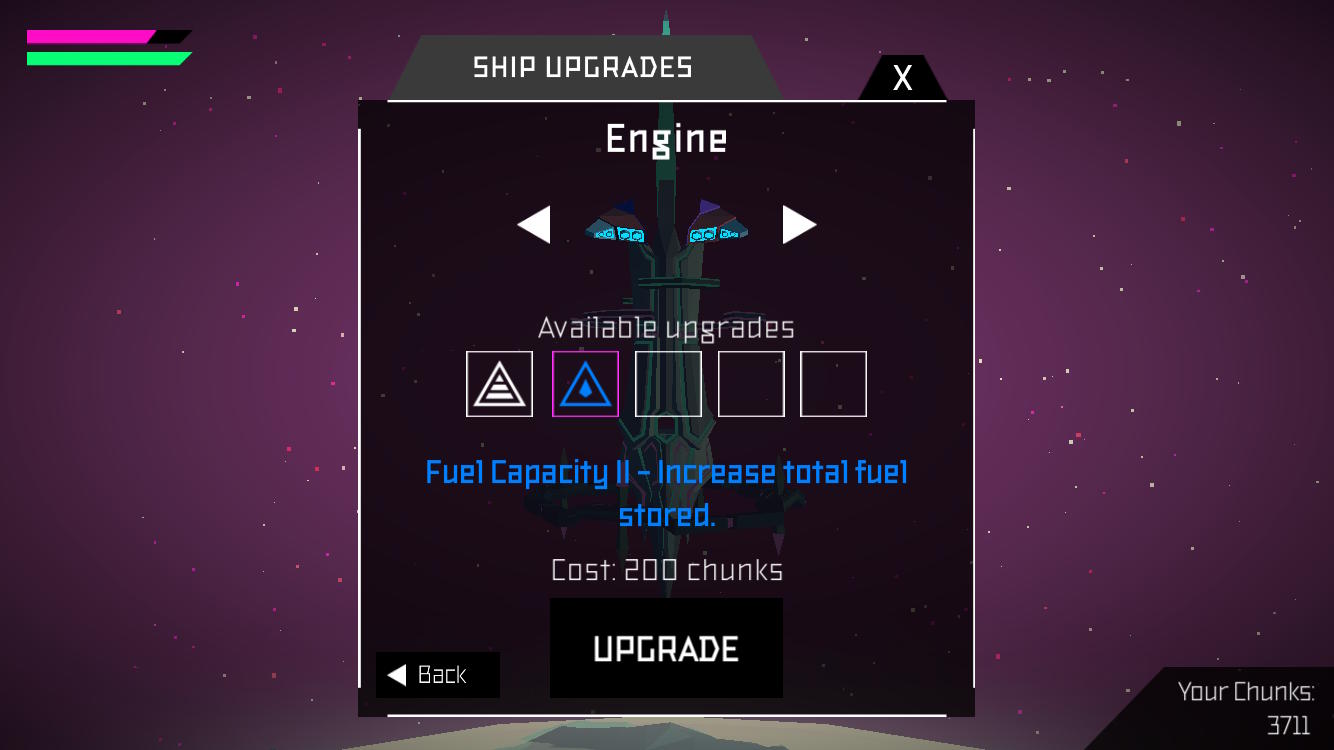 Whenever you choose to fly to a new location, you run the risk of a random encounter. Sometimes these are beneficial, like a mechanic fixing your ship for free. Others are dangerous, like an enemy ship attacking you or an asteroid belt damaging your hull.

The upgrades you can buy at stations will improve your chances of surviving negative encounters. Hull health upgrades replenish your ship's health and engine fuel upgrades refill fuel, so purchase these when you're low for a bonus fill-up. 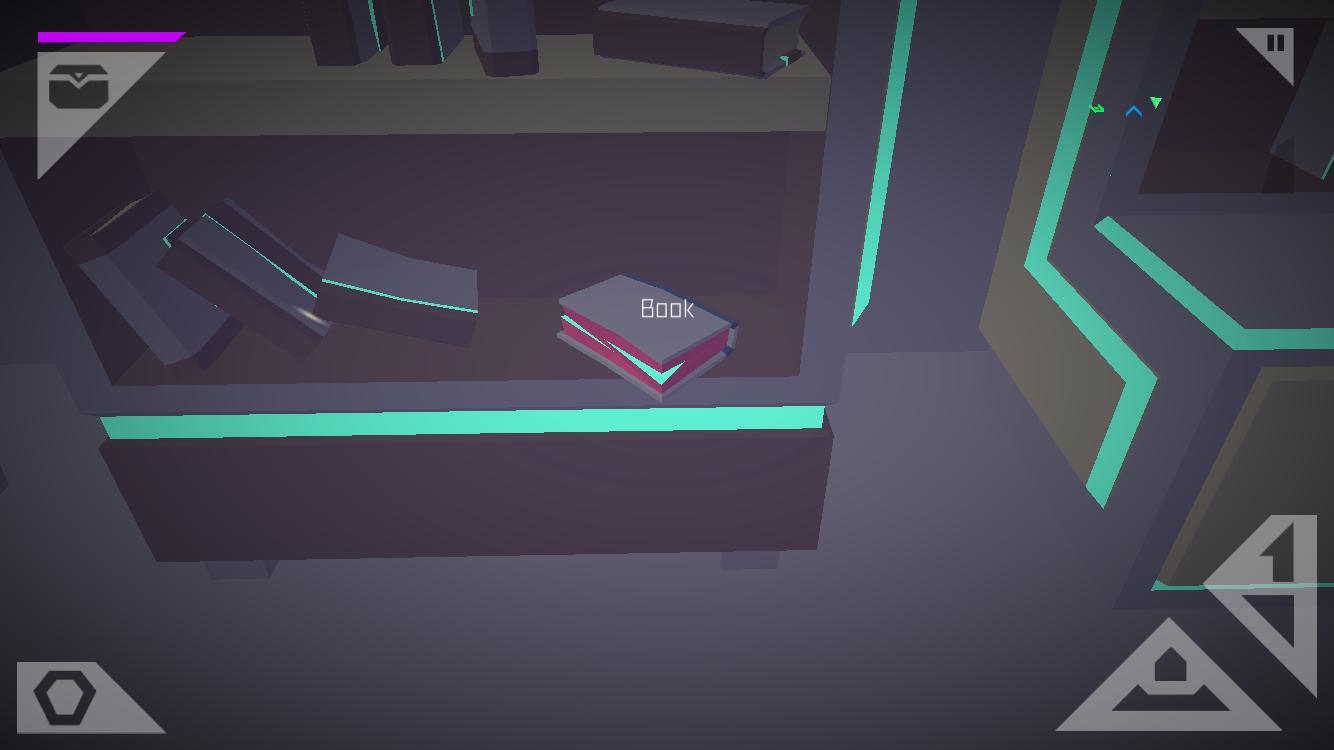 Most interactive objects—whether shootable like a crate or otherwise—will have a label when you stand close. Even seemingly normal items may be interactive, so be sure to keep an eye out.

For instance, there are books scattered about the world that can be read when tapped. Interactive books have purple pages and look slightly different than decorative books. 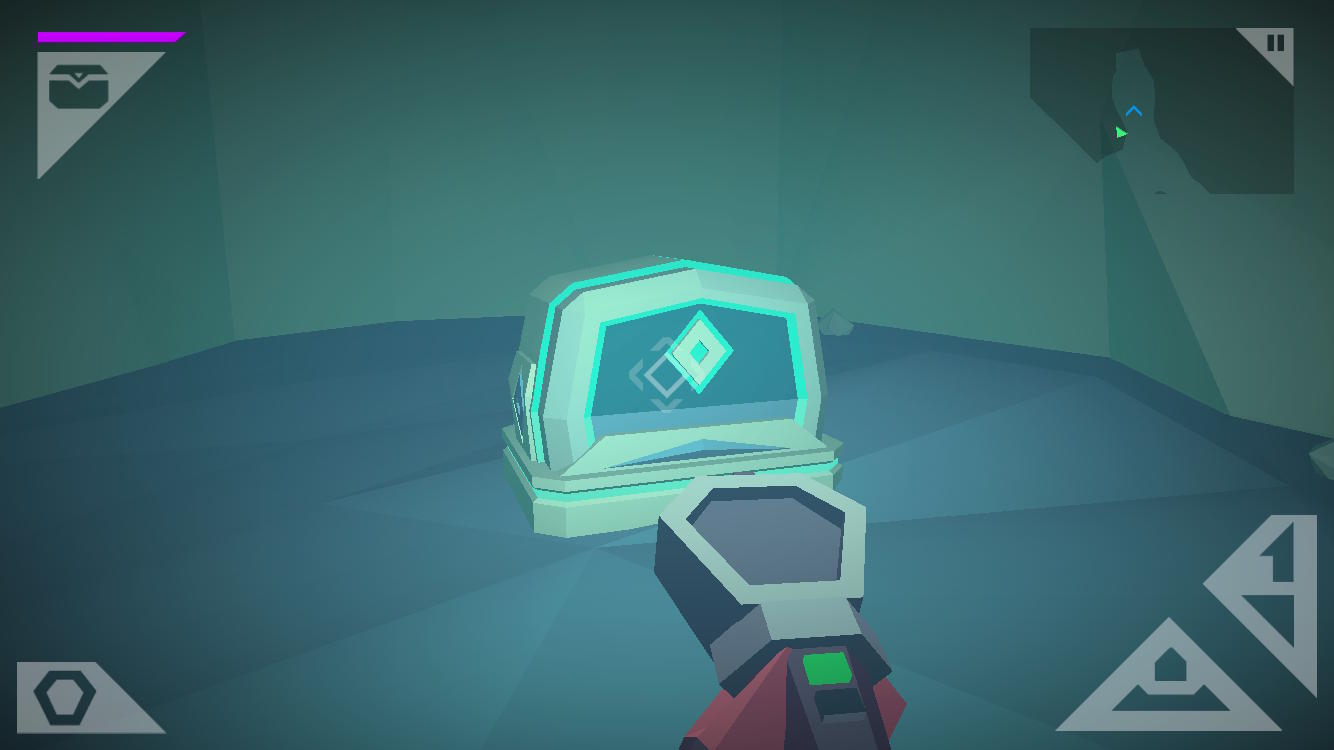 There are some small crates you may find on planets that look a bit like a toaster or radio and are otherwise innocuous. If you shoot these and collect the item inside, you'll gain a useful trinket that offers bonus stats. The trinkets you've collected can be viewed from the Items tab in Myrah's menu.

The general rule in Morphite is to look at and attempt to scan everything. As you play and become familiar with the worlds and their objects, you'll recognize obvious decorations, like tufts of grass or normal rocks. But you never know when you'll stumble upon something unexpectedly useful, or simply delightful.

Next Up :
How to download and play DC Worlds Collide on Android