Please can we have it in Europe?

Upon seeing Monster Hunter Smart for the first time, my fellow PG newshound Harry said: "I bet one pound that game will never come out in the UK."

"Oh, crap. I don't have a pound," Harry responded.

Anyway. There's no guarantee that Monster Hunter Smart will ever break out of Japan. There is hope, however. And we shall cling onto that.

As we said in our review of Monster Hunter Dynamic Hunting, the game is an "overly simplistic take on the franchise". The controls were shoddy, and Capcom had failed to capture the heart of the franchise here.

Monster Hunter Smart looks a lot more promising (or smart?) than the abovementioned iPhone game, though. We're not just talking visuals here, either. Capcom has refined the controls so that you can play the game with just one hand.

Perhaps even more importantly, Capcom has re-designed the game for a better bespoke mobile gaming experience.

As reported by Siliconera, Capcom is definitely focusing on ease of play and a more RPG-like structure in Monster Hunter Smart. 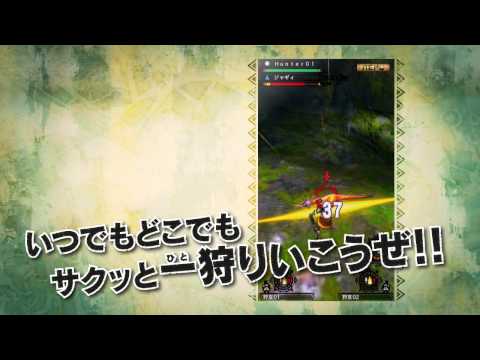 Certain actions are automated, such as guarding. You gather and attack, meanwhile, by just tapping the target on the screen.

Lastly, there's more of an emphasis here on joining up with friends to take on the tougher enemies. This may even be a pre-requisite for tackling some of the monsters. You can take up to two friends with you into battle.

As we mentioned earlier, there's been no word from Capcom on whether Monster Hunter Smart will be released outside of Japan (where it goes on sale later this autumn for iOS devices).

But let's keep the hope alive.