To add to an already expansive library of classic games, SNK has announced the next title to be added to its impressively vast ACA NeoGeo collection. This time around, we’ve got the legendary side-scrolling platform shooter Metal Slug 4 being released for iOS and Android.

If you know video games, you know Metal Slug. It’s up there with legends like Contra or Double Dragon, and sees you take on the role of Nadia and Trevor as the new characters added onto the roster from the previous games, and sees you traverse a World-War II-themed battleground, taking out enemies and using a wide collection of weapons and explosives to do your bidding. It’s a fairly simple series, and plays just like the previously mentioned 2-D side-scrolling action games, a simple move left or right and up and down while you take out evil soldiers, tanks, and even mecha further down the line. 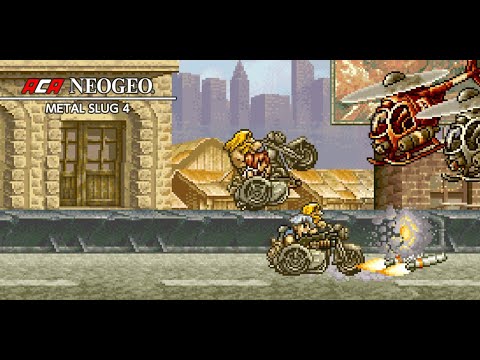 Metal Slug is a very influential series and is still going strong to this day with new additions to the long-running line of games, branching out into other genres like the recently revealed Metal Slug Tactics. So, if you’re a more modern gamer who hasn’t had the chance to play this wonderfully classic, this is an excellent chance to give it a go. Throw in the quality-of-life additions that can be found within each and every ACA NeoGeo release like quick-saves, save-states, and pad support, and this is the best way to experience old releases like this.

Looking for more side-scrolling action? Check out our Top 15 best 2D platformers for iOS!
Next Up :
Descenders is an extreme downhill freeriding game that's out now on iOS and Android