Hands on with Luc Bernard's Mecho Wars on iPhone

We spend some quality time with Luc Bernard’s latest epic

Luc Bernard is a self-styled rock star of video game development. His career spans only a few years, but in that relatively short space of time the 23 year-old has managed to generate more publicity than many designers have managed during their entire lifetimes.

Eternity’s Child - his first project - was a ‘Marmite’ release if ever there was one. Despite the fact that it garnered some particularly scathing reviews, a vibrant community has grown up around the game and new player-created level mods are continuing to spring up more than a year after its release.

Bernard has since set up his own studio in the form of Oyaji Games and he's been feverishly working away his next title for quite some time now. He’s gone to great lengths to ensure that people are aware that Mecho Wars is going to be something special: not only does he have a talented programmer with a proven track record involved, but the visuals are also looking mighty fine indeed.

We had chance to sit down with a preview build of the game recently and while it’s far from finished, the obvious potential shines through as bright as Tom Jones’s veneers.

As you can probably gather from the screens, Mecho Wars owes a massive debt to Intelligent System’s seminal Advance Wars series. This should come as little surprise when you bear in mind that it’s one of Bernard’s favourite game franchises.

The gameplay follows a similar pattern. Your objective is to dominate each level by obliterating the opposing forces. The key difference here is Bernard’s imagination - the design of these units is unique and this sets the game apart form pretty much any other turn-based strategy title you could mention. 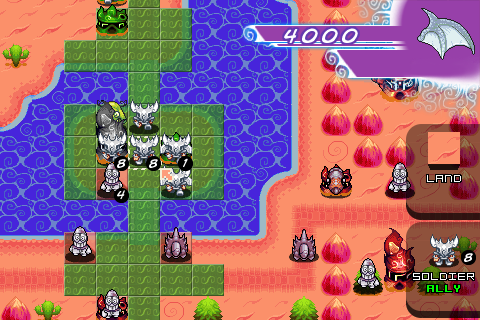 You can control a wide range of units (around 18 in total, according to the developer, although at this stage this is subject to change) and each has its own strengths and weaknesses.

The units themselves come in a wide range of shapes and sizes. As was the case in Advance Wars, there’s a pecking order at work here: certain units might be hopelessly weak against one type of opponent but immensely powerful when fighting another.

Because the game deviates from the vehicle-based design of Advance Wars for a more organic aesthetic it’s harder initially to spot how the unit relationship works, but after a few moments you start to become familiar with the abilities of your forces and it becomes easier to formulate effective strategies. 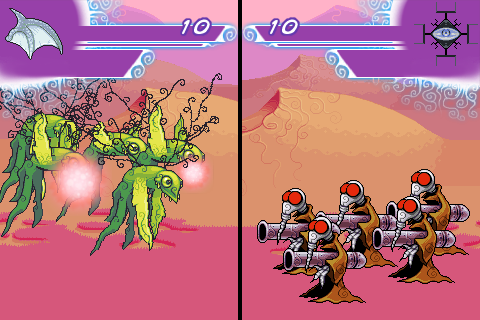 Winning in direct combat is one thing, but controlling the various buildings and facilities dotted around the map is also of vital importance. Aside from your main HQ you can occupy other structures, which allows you to manufacture more units. Unit construction requires cash, and this is generated during each turn, with the amount you get determined by how many buildings you currently own.

Considering this is still a work in progress, the presentation is fantastic. Visually the game positively drips with character: Bernard’s designs are as good as ever, and if you’re a fan of 2D pixel art then you’ll undoubtedly appreciate all the time and effort that has obviously been lavished on this game.

The music (which comes courtesy of the exceptionally talented Sean Beeson, who did such a sterling job with the Eternity’s Child soundtrack) is also excellent, although in the version we had there’s only one tune which repeats over and over. It sets the tone neatly, though, and if the final game can contain more music along the same lines then Mecho Wars should provide an aural experience as pleasing as the visual one. 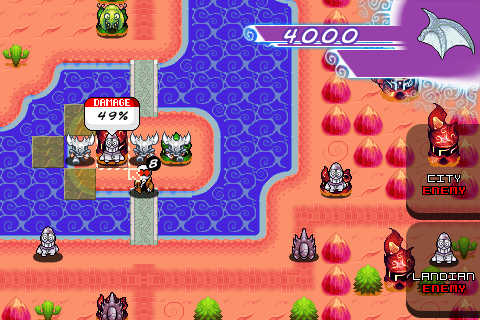 The control system is probably the least pleasing part of the entire game so far. Moving around the map takes some getting used to as it doesn’t subscribe to the traditional ‘touch and drag’ method we’re so accustomed to on the iPhone. Your finger basically acts like a mouse pointer, so to view a different portion of the map you have to tap the desired location.

For example, if you want to investigate events in the top-left part of the play area you have to tap the top-left part of the display and the viewpoint will shift there. It’s perfectly possible to adjust to this method of control, but it’s not really an ideal solution. Hopefully, Bernard and his team will be able to tinker with this element a little more before the final release.

It’s worth noting that the version we played isn’t yet complete. Bernard has hinted that there are other elements still to be incorporated - a ‘night and day’ time system being the most intriguing - and the preview build we played lacked any of the wacky storyline and bizarre characterisation that is promised for the finished product.

From what we’ve seen so far Mecho Wars is shaping up to be an excellent addition to the App Store and should satisfy those of you hankering for an Advance Wars-style experience on the iPhone. Naturally, when we have the final version you can expect our usual in-depth critical appraisal. 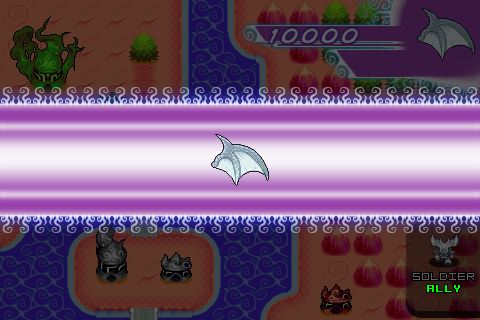 iPhone turn-based game Mecho Wars 'MIGHT' be coming to Android