Competitive multiplayer shooters are a dime a dozen these days, because there’s an unmistakable appeal to gunning down your BFFs. While it’s easy to pick a random military-themed shooter for your all-out brawl, doing so with mechs in a sport theme puts a totally different spin on the concept. Mech Arena is exactly what its name suggests—you use mechs across a bunch of sporting arenas to bring the pain, because taking your friends down in a mech is just a helluva lot cooler.

Not just another real-time showdown

Plarium Global Ltd. of RAID: Shadow Legends and Vikings: War of Clans fame promises that Mech Arena: Robot Showdown isn’t your run-of-the-mill action game. The fast-paced multiplayer title has everything you want in a typical arena battler but adds a more skill-based component to its gameplay, ensuring more competitive battles that aren’t just about shooting first and asking questions later.

Made more exhilarating with high-quality 3D graphics, the game lets players who know how to take advantage of their mech’s skills to dominate the match as opposed to the player who simply has the biggest guns. 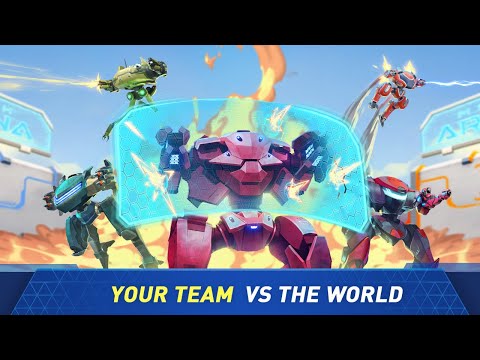 Of course, having the biggest weapons isn’t a disadvantage at all, as you can freely take your pick from dozens of mechs, skins, and firearms to add to your arsenal. Players can maximize their mechs’ customized special abilities with different combinations that’ll turn the tide of battle, so even a free-to-play player can reign supreme simply because he or she knows how to optimize skills best.

Pay attention to your mech’s speed, firepower, and armor, and pick your poison from among 39 upgradable weapons. Then, dive into the 23 immersive maps and prove your worth in live mech wars, whether you’re sneaking through the sands of Paradise Plaza or raining fire in the Forbidden City.

Quick three-minute sessions combined with tight spaces make for true on-the-go team battles for mobile players. There’s less roaming around and more adrenaline-pumping action, so you’re sure to get thrust into the line of fire from the get-go.

Thanks to speedy matchmaking and instant respawn, you can enjoy the four gameplay modes without getting sidelined from the action. Climb up the ranks in Tournaments and Quick Matches, or take part in 5 vs. 5 and 2 vs. 2 Deathmatch modes. Team up with your pals in 5 vs. 5 Control Point Capture modes, or you can even set Custom Matches to suit your fancy.

Fast, furious, and futuristic fun for all

“We designed Mech Arena: Robot Showdown from the ground-up to be an accessible and balanced pick-up-and-play shooter on mobile for all ages and skill levels,” says Aviram Steinhart, CEO of Plarium. “Casual shooter fans looking to play a few quick rounds can jump right into the action. They'll be able to have fun battling with different weapons, maps, and mech customizations, without committing to serious competitive play against more dedicated players.”

Looking for a LAN party in your pocket—but with mechs? Mech Arena: Robot Showdown is now available worldwide on the App Store and on Google Play. It’s a free-to-play game with in-app purchases.

What's A Preferred Partner Feature?
From time to time Steel Media offers companies and organisations the opportunity to partner with us on specially commissioned articles on subjects we think are of interest to our readers. For more information about how we work with commercial partners, please read our Sponsorship Editorial Independence Policy.
If you're interested in becoming a Preferred Partner please click here.
Next Up :
The best platformers you can enjoy with a Razer Kishi

Mech Arena is commemorating the launch of the FIFA World Cup 2022 with the upgraded MVP Neymar Jr. Pilot