Masketeers: Idle Has Fallen, the orb chaining idle RPG, is available now for iOS and Android

Initially announced way back in March, Appxplore's latest idle RPG, Masketeers: Idle Has Fallen is now available for iOS and Android. It has proven to be a highly anticipated game since it was first announced and has since accumulated an impressive 1 million pre-registers.

To celebrate hitting that milestone, a premium Sacred Chest will be unlocked for all newcomers to the game on launch as well as those who pre-registered. This will contain Masks, Runes and Dust which would normally cost $20 if purchased through in-app purchases. Additionally, Appxplore has also unveiled a new sabre-wielding Masketeer called Felina who is also available on launch. 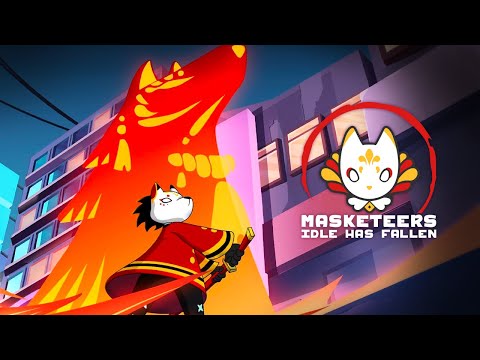 In the world of Masketeers, individuals are given masks of power that enhance their abilities which enable them to fight off the Wraiths that have infested the lands and feed off peopel's negative emotions. Players will have to assemble a team from the titular Masketeers, taking the different skills and abilities each character possesses into consideration.

Alongside their masks, these characters can be equipped with runes of various rarities that provide bonuses. On top of that, they can also be paired with guardians, wisps, charms, and fortune creatures that will bring that character luck in battle.

All of which will undoubtedly help in combat, which sees players chaining together Orbs to unleash powerful attacks on enemy Wraiths. Of course, given that this is an idle game, the battles themselves can be carried out automatically and you'll be free to have as much or as little involvement as you choose.

Masketeers: Idle Has Fallen is available now over on the App Store and Google Play. It's a free-to-play game with in-app purchases.

Looking for a more traditional RPG experience to play on the go? Here are 25 of the best available for iPhone and iPad
Next Up :
GWENT’s winter update goes live tomorrow and adds new cards to each faction

Masketeers: Idle Has Fallen is celebrating its first anniversary with events and new Costumes