Netmarble has just announced a new update for its superhero mobile RPG Marvel Future Fight. The update is celebrating the release of the Marvel Cinematic Universe’s latest film – Thor: Love and Thunder. Players will be able to add new superhero uniforms featured in the movie, a brand new Legendary Battle Stage, and a lot more. 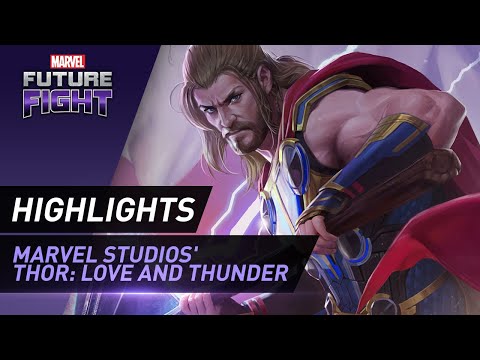 Marvel Future Fight’s latest update will allow players to equip new costume variants for their favourite heroes – Thor, Jane Foster’s Thor, and Valkyrie. These outfits have been taken straight from Thor: Love and Thunder with Thor wielding Stormbreaker in his new suit, Jane Foster’s Might Thor and the rebuilt Mjolnir, and the new Queen of Asgard, Valkyrie.

With this update, Thor can finally be upgraded to Tier-4 with a Striker skill, while the Jane Forster version can be upped to Tier-3 with an Ultimate skill. Some other heroes from the series like Angela, Skurge, and Destroyer will receive new Awaken Skills and Potential Transcend. This promotion would, of course, be incomplete without the movie’s fantastic villain Gorr the God Butcher making an appearance. The god killer is the new super villain in the Legendary Battle stage The Fate of New Asgard. Players must save this land from Gorr as the Asgardians have already been through enough.

Some more features and improvements have also been added to Future Fight. The S.H.I.E.L.D Archive has been revamped to feature better UI so that players can review all the data gathered from various in-game items. They’ll also be able to see the Content Rewards more easily now. Plus, more goodies will be available thanks to the Multiverse Invasion Ranking System that gives out prizes based on individual scores.

Thor: Love and Thunder takes players on a wholesome journey with the God of Thunder as he attempts to find himself again. Be sure to watch the movie and get your in-game film-inspired uniforms soon by downloading Marvel Future Fight for free.

Next Up :
Punishing: Gray Raven is hosting a new collaboration with NieR: Automata