Man Vs Missiles: Combat is a dogfighting game that's available now on Apple and Android devices

How are your barrel rolls?

I do enjoy games with pretty literal titles and Man Vs Missiles: Combat is certainly that. It's the latest game from Spiel Studios and a sequel to Man Vs Missiles. It's available now on iOS and Android.

The aim of the game is pretty simple. You're a lone pilot who has to evade an entire squadron of fighter jets that want to knock you out of the sky. You control your plane by rotating your finger around the virtual analogue stick, this just turns it though, the movement is automatic.

This is the core of the game as timing your turns will be the difference between successfully dodging a missile or hurtling back to Terra firma in flames. You don't have to be completely passive though as your plane does come equipped with its own firepower so you can shoot back too, though you'll have to wait till a few levels in first. 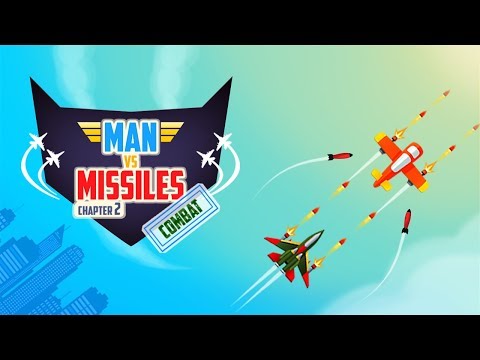 Apart from barrel rolling and gunning down enemy jets you'll also be able to upgrade your planes in the shop. Here you can upgrade your gun, shield and boost or purchase an entirely different aircraft. There will also be power-ups scattered amongst the clouds including flares and shock waves to help deal with the aerial assault.

If you fancy yourself as a bit of an expert in a dogfight then there are leaderboard based tournaments available to scratch your competitive itch. Putting in a good performance can earn yourself some coins to put towards a new plane.

The original Man Vs Missiles was very popular, amassing over 5 million downloads according to the developer. It also holds a 4-star rating across both the App Store and Google Play, so it certainly seems as though the people enjoyed it.

Man Vs Missiles: Combat is available now over on the App Store and Google Play. It's a free-to-play game with in-app purchases.