Machinal Instinct is a fast-paced, casual fighting game that's available now for both iOS and Android. It comes from Pomelo Games who you may be familiar with through one of their other titles which include the likes of Once Upon a Tower, Dinosaurs are People Too and Bullet Boy.

Their latest effort is set in a world where animals pilot powerful mechs and then battle against each other in a worldwide tournament, for some reason. There are six different pilots to unlock, each of which has their own stats and include a pig, koala and monkey. 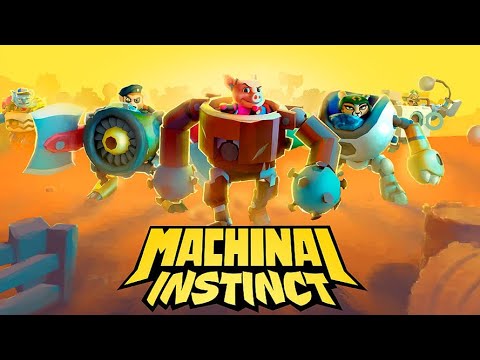 Beyond that, there are three different types of melee weapon to choose from for your mech - axes, fists and chains. Meanwhile, there are two different long-range options with a choice between rockets or grenades. More of both are set to arrive in future updates.

Machinal Instincts' mechs are controlled through a series of taps and swipes. Movement is simply holding down and dragging in the desired direction whilst light attacks are a tap lower down on the screen and heavy ones are higher up. Meanwhile, to fire a projectile you'll have to make a U shape on the screen.

On the defensive side of the game, you'll be able to swipe either or left or right to dodge incoming projectiles whilst simply holding down on the screen will make your character block. Then, if you're close to your opponent and need some breathing room you can swipe up to throw up when they're close to you.

Machinal Instinct is available now over on the App Store and Google Play. It's a free-to-play game with in-app purchases.

Looking for some multiplayer games to scratch that competitive itch? Here are 25 of the best available for iPhone and iPad
Next Up :
Defend your castle across different arenas in Merge TD Hero - Tower Defense, out now on Android and iOS