Developers of GTA-inspired online shooter, Hassle 1977, have big plans for their multiplayer title

Hassle 1977 is an online multiplayer shooter that's played from a top-down perspective, drawing inspiration from the earlier GTA titles. The game recently left Early Access on 17th October and the developers have big plans for the game moving forward.

Today, for instance, the game has now become available for PC through Steam and will support cross-platform play with both the iOS and Android versions of the game. Beyond these releases, Limkernel Gamedev Gang also plans to launch the game on Nintendo Switch in Q1 of 2021. 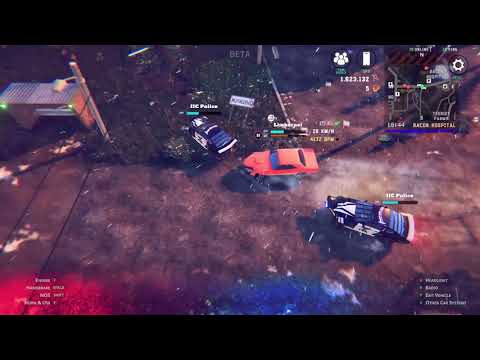 There are a few updates on the way to the content within Hassle 1977 itself too including an in-game event to celebrate the new year. Aside from that, they're also preparing for release in China, making an in-game chat for players to communicate with and working on a new game mode, though there are no great details on what this will involve just yet.

If you're unfamiliar with Hassle 1977, it's an online multiplayer shooter that takes place in a retro wave and cyberpunk world. As with any cyberpunk world, new technologies are threatening people's freedom so rebel gangs have formed to fight back against those who try to enforce its usage.

There are a host of different PvP and PvE game modes for players to try out including Team Deathmatch, Street Racing, Drift Racing and the Battle Royale-esque Hustle Bustle. Here you'll need to gather as much data as possible and do so faster than anyone else. You can check out some gameplay from Hassle 1977 in the embedded trailer above.

Hassle 1977 is available now over on the App Store and Google Play. It's a free-to-play game with in-app purchase.

Looking for some multiplayer games to scratch that competitive itch? Here are 25 of the best available for iPhone and iPad
Next Up :
Happy Game will soon give mobile gamers psychedelic nightmares on February 2nd