PGConnects: Line Wobbler is a joyous mix between an art installation and a dungeon crawler

There is something inherently joyous about play. Whether it’s running around with a stick or falling into a digital world, play lets us experience things in a different way.

Which is why Line Wobbler is so brilliant. Essentially it’s a 1D dungeon crawler. That you control with a mix between a sink plunger and a spring. Honestly though, bear with me. 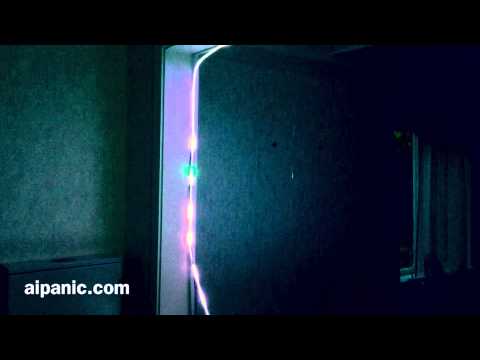 The game plays out on a string of lights. You’re controlling a green light. Red lights are bad. Push the joystick forwards and you move along the lights. You attack by waggling the stick.

It’s enough to just release it and let the spring do the work, but giving it a bit of a thwack is way more fun. It reminds me of frantically bashing old joysticks to try and avoid a pixelated threat on the Spectrum.

The level, such as it is, snakes up a booth wall and then along its top. It’s probably about 20 feet long all told. There’s a gate at the end that you’re aiming for. Get there and you move on to the next challenge.

Getting a bit wobbly

It’s amazing how what’s little more than a small pole and an expensive Christmas decoration can manage to convey everything that makes a dungeon crawler a dungeon crawler. But then I suppose that all games are really just strings of lights that you’re manipulating with a strange wodge of plastic.