There are two threads that run through the puzzle genre on mobile - ingenuity and frustration. For every amazing puzzler, there's one that nerfs your attempts, and requires the game to give you what you need, rather than relying on skill. And Lifty manages to have a feet in both of those camps.

It's a game about delivering the right coloured little critters to the right coloured floors - there are shades of plenty of other games that are probably springing to mind right about now, but Lifty throws its own ideas into the mix to make something that, for the most part, is a lot of fun.

But the frustration creeps in after an hour or so of play when you're bashing your head against the same challenges, hoping that the characters you get to deliver fall in the right order this time.


You lifty me up

You're in control of the lift, as you might be able to work out from the name of the game. You can move it up or down by pressing on the relevant button. Release your finger and the lift will stop at a floor if you've timed things right.

Your lift-needing critters walk in from any of the platforms arrayed above you, but you need to drop them off at the correct level. You also need to grab lift-riders before a ticking clock above their heads runs down - if you don't, they'll explode and you'll lose one of the three lives you've got.

Lose all three, or run out of overall time, and you'll be dropped back to the start of the level you're currently playing on. There are power-ups that give you extra time, speed up the lift, change the colours of the platforms, and more. Different lifts have differents strengths and weaknesses too. 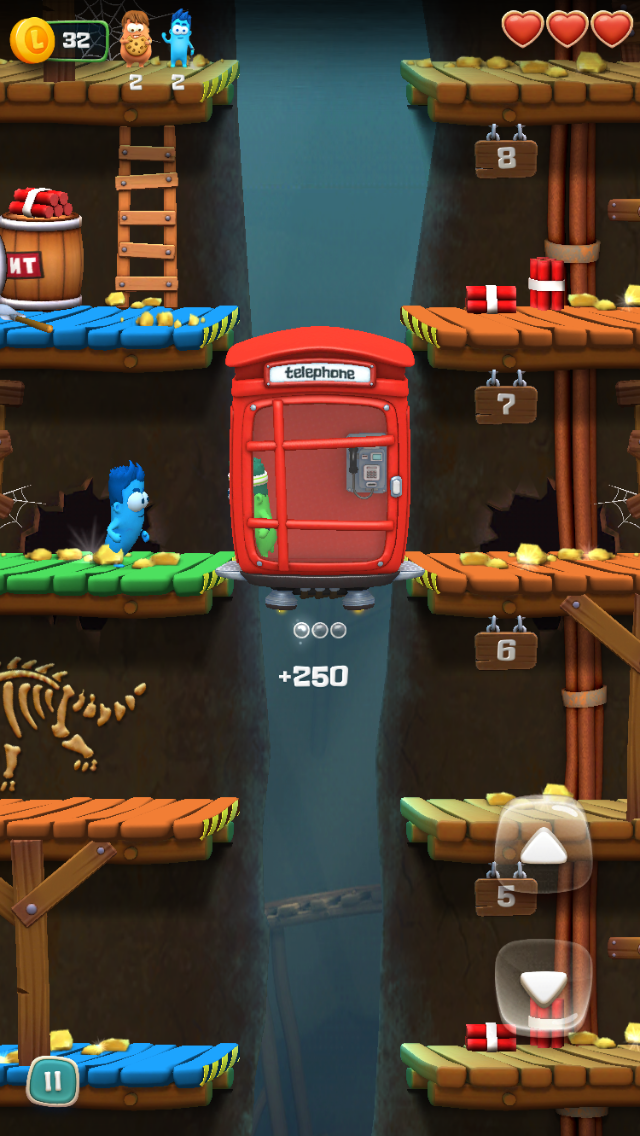 Every section you've got a set number of creatures to deliver, but there's a twist - some of the characters you need to pick up take up more space in your lift than others. So you need to pick carefully, working out the shortest route to get everyone where they need to be. With new people walking in and wanting to go somewhere on the regular, that's easier said than done.

Sometimes though you'll be left with one character to deliver and not enough time to do it, no matter how hard you try. It's a similar sort of thing to the free to play mechanics in the likes of Candy Crush, it's just a lot more obvious in a game with a slower pace and fewer shiny things on screen.

The first few levels of Lifty are great fun, but it loses its way after a while, strangling your progression to get you to spend coins or watch videos. It's not the end of the world, and a lot of players are going to be used to it now, but it does mean people with a penchant for premium are going to bolt.

Lifty could have been really good, but the missteps it takes mean that instead it's destined to languish in the 'eh, it's alright' section of your brain. It's not quite clever enough with its psychology, and no one likes to know they're being manipulated, no matter how small those prods and pokes might be.

As it stands, Lifty is worth checking out - it's free, and there's some fun to be had here. But when the walls start to close in, and it becomes a bit too obvious, you're likely to put it down and give something else a go.

There are some nice ideas in Lifty, but it doesn't quite manage to hit the heights it should
Next Up :
Hundred Days review - "A success for the management genre"