Desperate last stands have long been one of the calling cards of science fiction. Humans versus unfeeling aliens in a final battle to decide the fate of the universe. Of such things are Netflix series made.

Let Them Come understands that. And so it takes the last stand and makes a game out of it. You're an embattled marine trapped on a spaceship beset by hordes of alien ghouls. Shoot them. Shoot them all.

The game sees you stood behind a makeshift barricade in a side-on tunnel. You've got a machine gun, and a few other bits and bobs, and waves of monsters scuttling towards you.

Tap one and you'll swing a bat or a blade to knock back alien freaks that get too close. Tap another and you'll toss out a grenade. You'll need to buy these though, and they're not cheap. 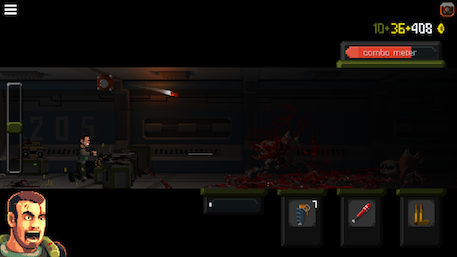 Your health is represented by a Doom-like face in the bottom left of the screen. Take too much damage and you'll die. Often that leaves your portrait with the top of its skull ripped off.

So you'll go back, arm yourself up, upgrade your weapons, and try again. The game starts from the level you died at, so you're always making forward progress, even if it's only minimal.

Boss fights pop up too, and here the game loses some of that momentum. They're tough, and you'll need a good chunk of currency to power yourself up enough to finish them.

Handily though if you do get stuck, there's a rampage mode that sees you fighting waves of beasts. You get a lump of gold to spend, then kill as many as you can. There are leaderboards here that let you see how well, or poorly, you're doing.

Let Them Come might not have the quick-reaction crunch of other space shooters, but there's still a lot to like in its dingy halls and skittering terrors. It's fun, but it definitely takes a while to really get going.

But as last-stand simulators go, it's pretty damn impressive. Right down to the gurning face of the main character as the bullets blast out.

There's hectic fun to be had here. But, unsurprisingly for a last-gasp defence of humanity, it does get a little repetitive after a while.

A frantic battle to the death, and then to the death again, that does lose a bit of its shine in the grind
Next Up :
Happy Game review: "Don't worry, be happy?"