Watch out for trolls (Updated with spring 2014 release info)

Unlike previous Lego games derived from film franchises, Lego The Hobbit will only feature the first two The Hobbit films of the trilogy.

The third The Hobbit film is expected in November 2014. It's speculative, but it's possible this third film will be covered in a follow-up game.

Promo art for a future Lego The Hobbit video game for PC, PS3, PS4, Xbox 360, Xbox One, Wii U, and 3DS has been spotted on the back of instruction booklets for physical Lego 2014 Hobbit sets.

When approached by Eurogamer about the leaked artwork, Warner Bros. declined to comment.

"Coming sortie prévue en 2014," the tagline on the leaked artwork for Lego The Hobbit reads. Basically, this means it'll be out in 2014.

Furthermore, Bilbo, Thorin, and Gandalf are shown in their Lego forms to the left of this text. 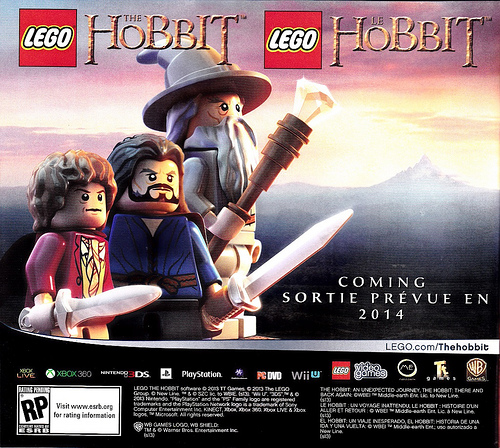 Given the third and final The Hobbit film is due in cinemas on December 17th, 2014, it's likely that this tie-in Lego game will be launched at the end of next year.

There is, of course, a Lego Lord of the Rings game available on handheld and mobile. So, this The Hobbit-based spin-off game would be by no means unexpected.

We'll update you with any details on Lego The Hobbit as we hear them.