If I were less concerned with keeping my post here at Pocket Gamer, I'd simply review Le Vamp with the following six words: it's an endless-runner with vampires.

While that might be an accurate statement, it's not entirely fair to dismiss Le Vamp as just another by-the-numbers endless-runner.

There are plenty of the expected genre trappings, traps, and tropes in Le Vamp, but there's also something more, which helps to distinguish it from its growing crowd of peers.

If you've ever played an endless-runner on your phone or tablet, you'll know what Le Vamp has in store for you.

At the start of a run, your character - an adorable, purple-skinned Dracula with milquetoast eyes - charges off from screen left to screen right to escape an angry mob of French stereotypes.

Seriously - there's a mime and everything.

As levels progress, you'll encounter enemies that must be tapped, flicked, or swiped out of your way. Every so often, you'll need to cross a stream by swiping a tree down to form an ad hoc bridge, but it's hardly pulse-pounding gameplay.

What sets Le Vamp apart from other endless-runners is the way in which it presents its enemies, obstacles, and elements.

Each enemy in Le Vamp is a culinary grotesquerie that lurks ahead of your vampire, waiting to trip him up and send him back to the waiting pitchforks and torches of the mob behind him.

Gigantic, green sausage men (Le Wurst), angry turnips, and trios of towering Jack-o'-Lanterns are a few of the enemies you'll meet - and the less said about the blood-engorged garlic pigs, the better.

While it's difficult to say that these enemies add charm to Le Vamp, they certainly add a unique appeal that will resonate well with young children and those who enjoy Tim Burton films.

Another interesting aspect of Le Vamp is its health mechanic.

Your vampire begins each run anaemic and in dire need of haemoglobin. As you collect blood - from pink, swollen pigs, naturally - your vampire will sprint ahead of the mob. If you run too far without collecting blood, the vampire's health will decrease and the mob will catch up.

This is a fun distraction from the tried and tired endless-runner gameplay of collecting coins to buy power-ups, and it adds a pleasant level of challenge to an already pleasant game.

In the end, Le Vamp will not redefine the genre and it's difficult to imagine it being remembered in a year or two's time, but for now it delivers a lively bit of casual gaming that will delight children and challenge fans of endless-runners at the same time. 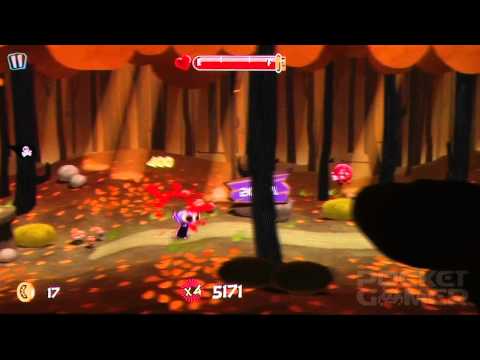 Le Vamp is a cute and enjoyable - if not groundbreaking - endless-runner that takes few risks
Next Up :
Hindsight review - "Deeply emotional but a tad repetitive"