Ugh, WHY is it so addictive?

If you weren't too fond of Kitty Powers' Match Maker turn away now as the love goddess returns to mobile better than ever with her new title Kitty Powers' Love Life on February 8th. 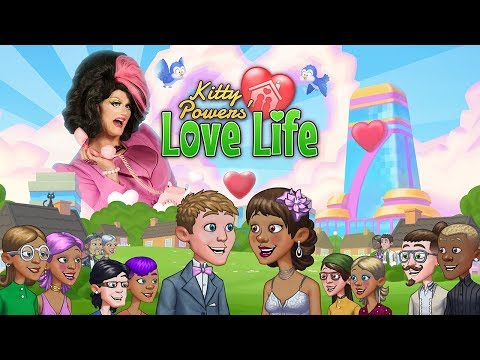 Subscribe to Pocket Gamer on
Love Life sets us a new challenge where as well as helping couples with their love lives (duh) you're also managing your very own village of newly-matched couples. Rather than just taking your couples to restaurant after slightly-fancier restaurant, your villages have new hot-spots like libraries, nightclubs, and shopping malls.

Kitty Powers, AKA Richard Franke Director and Lead Creator, said, "Because our game, Kitty Powers' Matchmaker exploded all over the internet, we're now able to take our fans 'all the way' to their 'happy ending' with the sequel. The new simulation element means our players can interfere in the lives of multiple couples at once, build their own town and watch their residents relationships flourish or flounder!"

Thanks to procedural generation, you've got trillions of matches to make so it's not exactly a one-trick pony. From the looks of the trailer, there're a few new mechanics at play here including simulated counselling sessions and some new mini-games.

I know dating sims won't be everyone's cup of tea, but Kitty Powers' games always make one thing abundantly clear: diversity is normal. Better yet, it's done without calling attention to it, and perhaps that's why I've had so much fun with Match Maker in the past.

Love is love and everyone deserves it, even code.