You might well have heard of Killer Queen, it's a ten player, strategy arcade game (as in the location arcade, not the genre arcade).
Each player has one button and a stick and must work with their four teammates to win a victory against the other team. One player takes on the role of a queen bee, the other four are worker bees who can become warrior bees if they can get a berry back to the base.

Stocking the base full of berries is one way to win, another is to kill the enemy queen until they are out of the stock, the final is to ride a snail back to your base. As you can imagine, the snail victory often appears out of the blue, while a team is focused, distracted or over-engaged. 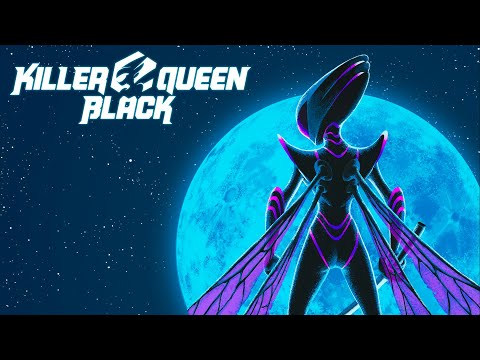 Killer Queen Black is an eight-player version of the game with an overhauled, glam-rock inspired set of visuals. There's also a few new features added in: multiple weapons, new music and a new, black colour scheme for a winning team.

Not only will the game be releasing digitally, it'll also see a physical release for the Xbox and Switch when it releases. The physical version will be available on the Switch at some — as of yet unspecified time — during the summer, with Xbox following later. It'll also launch with cross-platform multiplayer between those two platforms and PC.

Killer Queen continues to do well in the, over 40, locations that the arcade machines are now installed. Hopefully that success can translate well onto the Switch: a console which definitely has a lot of multiplayer games, however not many that seem to build up a strong community outside of the biggest titles.

Interested in finding out more about upcoming games? We've got a whole section for them.
Next Up :
Pokemon Go and Amazon Prime Gaming's latest rewards bundle is now available and it features a mysterious reward