Infinite Galaxy: Everything you need to know about the Cosmic Ocean: Origins update

By Pocket Gamer staff
| May 30

With the Empire on the verge of collapse, lawlessness and chaos now rule over the stars. Remnants of hope still persist however, as bands of Resistance fleets attempt to fight back against lawless pirates and bring peace to the universe. That’s the story behind Infinite Galaxy, which sees you take on the role of Commander of one of those Resistance fleets, and the task of building a Spaceport and engaging in intergalactic battles to help pick up the pieces of a shattered civilisation.

Whilst the premise may feel overly familiar, the gameplay experience and strategic possibilities that Infinite Galaxy has to offer is anything but. Over one year on from its global launch for mobile devices, Camel Game’s deep sci-fi strategy game has continued to see its overarching narrative expand and opportunities for research, recruitment, base expansion, and ship assembly, continue to grow with every update.Best of all, every choice you make in the game will have lasting consequences throughout, so no playthrough is ever the same.

On top of its strategic and narrative possibilities the game’s universe has continued to expand as well, with Infinite Galaxy’s innovative double layer map revealing more regions to explore and missions to embark upon. 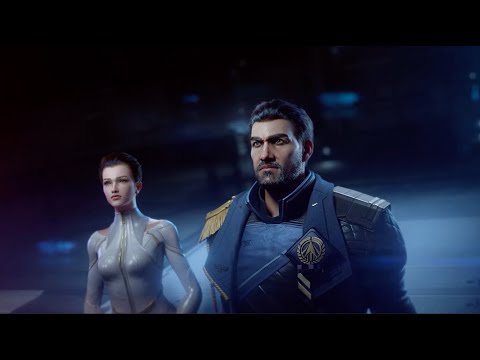 Right now, Commanders have the chance to explore this universe even further with the game’s latest Cosmic Ocean: Origins update, which brings the following fresh challenges to enjoy:

The hostile territories of the Cosmic Ocean

The new cross-nebula battle gameplay, Cosmic Ocean: Origins, will introduce new discoveries across the distant Andromeda galaxy, which includes unknown foes that will prompt Commanders to boost their Spaceports to survive.

As a basic rule, Alliances will be able to enter the cross-Nebula battle map provided all Nebulas have been opened for more than three months. On each map, there will be eight Alliances across various Nebulas, and each one will be assigned a rank based on total active Battle Power.

Everyone participating in the Cosmic Ocean map will receive a handy Shipbuilding Speed Up buff. The event will last for seven days, and other buffs include a boost in the capacity of the repair centre as well as a reduced requirement for the resources needed to repair ships.

Because war can be harsh and the Cosmic Ocean can be unforgiving, any Warships lost are lost permanently. After the event ends, however, a portion of the lost warships will be returned - the portion of Damaged/Needs Repair Warships in battle will, in turn, depend on the location of the battle as well as on the enemy.

On buildings, territories, and outposts

Players can expect new event buildings indicated by blue dots and yellow dots, as well as Checkpoints marked by green dots. There will also be a new Center City marked as a central red dot.

Checkpoints occupied allow Alliances to move to certain areas, while occupying buildings rewards players with occupation goodies and buffs. If a player builds an Alliance Outpost, they can extend their territory as they can only navigate places inside the Alliance territory. Spaceports within Alliance territory cannot be attacked as well.

How to register and join in on the fun

As the event is only open to Alliances, players can only take part in the event as an Alliance. The Alliance members must also be R4 or above to join; plus, a certain level of total active Battle Power must be reached by the Alliance first before joining in.

Commanders can look forward to tons of valuable in-game goodies and luxurious rewards, which includes the new crew member, Ghost (this valuable asset can boost the attack of Cruisers and other warships). Other rewards include fun Spaceport skin and avatar frames as well.

If you're keen on taking part in the event yourself, you can download Infinite Galaxy on the iOS App Store and on the Google Play Store for Android devices. It's a free-to-play game with in-app purchases.

For new players that are just joining the game, you can use the code pocketgamer2205 to score some extra in-game goodies up until June 27.

What's A Preferred Partner Feature?
From time to time Steel Media offers companies and organisations the opportunity to partner with us on specially commissioned articles on subjects we think are of interest to our readers. For more information about how we work with commercial partners, please read our Sponsorship Editorial Independence Policy.
If you're interested in becoming a Preferred Partner please click here.
Next Up :
World War Armies is an upcoming mobile strategy game that lets players experience PC-esque RTS gameplay